The third transformation is related to this change:  in the 21st century, Jews, especially American Jews, will view the diaspora differently than they view it today.  Currently, there is an enormous disjunction between the image of the diaspora in the contemporary Jewish and Christian mind, and the reality of the diaspora as it now exists and likely will continue to exist in the new millennium. Jews and Christians still imagine Jews as being a global people spread from one end of the world even unto the other, a people that is, as the late Dr. Jacob Rader Marcus used to say, "omniterritorial." The reality, however, is that the combined forces of persecution, on the one hand, and Zionism on the other have redrawn the map of world Jewry completely. The diaspora has shrunk by more than 40 percent since 1939, and Jews in the diaspora are more concentrated today than ever before.  Ninety-five percent of the diaspora Jewish population is confined to just fourteen countries today. A mere thirty-nine countries can boast communities of 5000 Jews or more. Most of the 200 or so countries of the world, including several where Jews had lived for millennia (Iraq, Syria, Ethiopia) are now completely barren of Jews or show tiny communities that are unsustainable. Indeed, huge areas of the world show no Jewish presence whatsoever (American Jewish Year Book 97). Where other peoples are preaching the gospel of globalism and spreading their diasporas north, south, east, and west, Jews who invented the very concept of a diaspora are reducing their exposure to the larger world and practicing consolidation.

That brings me to the fourth transformation to be discussed, which concerns the changing nature of general American religious life, and its impact upon Judaism and Jewish life. American Judaism, of course, has alwaysoperated within the context of American religion, and has always been deeply influenced -- some would say too deeply influenced -- by its norms and values, even when, as frequently happens, these run counter to millennia of Jewish tradition. This accounts for the extraordinary variety of Jewish religious expressions in the United States, parallel to what we find in Protestantism, and also accounts for such much-discussed phenomena as Jewish feminism, gay/lesbian synagogues, the growing interest in Jewish spirituality, and even the rising tide of intermarriages -- all of them developments that parallel, albeit with elements of uniqueness, what we find in contemporary American religion as a whole.

In the 21st century, American Judaism is likely to resemble the Protestant denominational structure ever more closely, with the result that in Judaism, as in Protestantism, there will be burgeoning pluralism, greater focus upon the individual than upon the group, more permeable denominational and even interfaith boundaries, and greater emphasis on the value of consent, as against the more traditional Jewish emphasis on descent. Most immediately, we see many new movements in Jewish religious life, including New Age Judaism, Havurah Judaism, Humanistic Judaism and more.

Similarly, I suspect that we will see a growing number of one-generation Jews:  Jews (converts to Judaism) who have neither Jewish parents, nor Jewish children. The cultural emphasis on "consent" rather than "descent" (free choice rather than automatically following in the ways of one's ancestors) makes this well nigh inevitable. A great many converts today assume that their children will freely choose their faith, just like they did.

Intermarriage reflects a similar emphasis on consent (marry whomever you choose) as opposed to descent (marry only a member of the tribe). Americans of all faiths are marrying across religious lines today in record numbers. It seems very unlikely that Jews will form an exception to this pattern. Indeed, it seems to me likely that American Judaism will come in the years ahead to resemble the pattern familiar to us from studies of Protestant denominational switching. A substantial amount of population "churning" will characterize the American Jewish community as eager newcomers enter the Jewish fold and dissatisfied veterans seek out greener religious pastures.

So much for transformations. Let me now turn to areas of uncertainty, where it seems to me that the future is still very much up in the air, and significant questions remain. The first of these questions is whether the 21st century will be marked by assimilation or revitalization? Signs of assimilation, of course, abound; witness widespread ritual laxity, disaffiliation, and intermarriage. Most Jews have friends whose children have either married out or are less religiously observant than their parents.

At the same time, however, anybody even remotely connected with Jewish life is aware of strong elements of revitalization and renewal within the community. Jewish educational institutions and programs of every kind are flourishing, including Jewish day care centers, private Jewish day schools (equivalent to parochial schools), Jewish high schools, Jewish studies programs at the university level, Jewish summer educational programs, Jewish summer camps, intensive talmudical academies (yeshivot), educational institutions for women, and an array of programs of adult Jewish study. There has also been a perceptible return to religion among young people. Every Jew today knows somebody whose children are far more religiously observant than their parents. Even in terms of synagogue attendance, figures point upward. 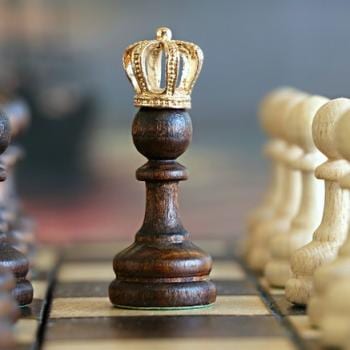 Is “The Chosen” Realistic to the World of Jesus?
Fellow Dying Inmate
4

"Confucian Shame in Christian Thinking" webinar video now posted
Jackson Wu
Get Patheos Newsletters
Get the latest from Patheos by signing up for our newsletters. Try our 3 most popular, or select from our huge collection of unique and thought-provoking newsletters.
From time to time you will also receive Special Offers from our partners that help us make this content free for you. You can opt out of these offers at any time.
see our full list of newsletters
Editor's picks See all columnists