God Has Been a Relentless Pursuer of My Heart 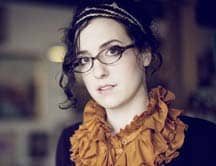 Twenty-seven-year-old contemporary Christian singer Audrey Assad claims that God has always been "a very steady and relentless pursuer of my heart." Though Audrey was raised Protestant, she converted to Catholicism in 2007 and allowed her faith to shape her debut album The House You're Building, which offers lyrics influenced by St. Augustine and Gerard Manley Hopkins. I recently had the opportunity to interview Audrey on the "Christopher Closeup" radio show about her journey of faith and the power of art. Here's an excerpt:

During your childhood and early teen years, what was your concept of God and experience of faith?

I would say I probably believed in a wrathful Father God, a tender Jesus, and a very mysterious we-don't-talk-about-him Holy Spirit. I think my view of the Trinity was a little bit skewed because they were all so different. Jesus was almost never wrathful, he was always meek. Then Father God was always expecting things from you but Jesus paid the price because He's so kind. And the Holy Spirit, we don't really know what He does so we're just going to leave it at that. We were Trinitarian but we didn't know what to do with that.

In 2007, you converted to Catholicism. The Church, a lot of times, gets knocked for being behind the times, having too many rules. Yet you chose to embrace this Church. Why? How did you see through the fog of what the culture says about the Church to find there was something of value there?

I met a Catholic. I was taught a lot of untruth about the Catholic Church -- you know, the classic "whore of Babylon" and Catholics aren't Christians, all that stuff. And growing up in Italian-Irish Catholic New Jersey, it was certainly plausible because everybody that I knew was Catholic and most of them didn't go to Mass, so I just assumed things. I think what enabled me to see through that was a person, a living person who shattered all those pre-conceived notions with his knowledge and his zeal and, foremost, his passion for Christ. That was what initially jolted me out of my opinions about the Catholic Church. Then from there, the teachings slowly just won me. It was the Eucharist ultimately, the teaching on Communion, that won my heart. I think I knew at the beginning when I started reading about it that if that was true, I had to sign up for that.

Since you're in the Christian music world, I imagine you encounter people from various denominations. Do you ever find yourself serving as a bridge between Catholics and other Christians in clearing up misconceptions the groups may have about each other?

All the time. I've become, along with Matt Maher, the token Catholic in the (Contemporary Christian Music) world. People are always asking me questions. I am not an apologist at all, but I did my share of reading over the years that I looked into the Church and after I converted, so I at least know where to point them most of the time. It's great, but it's hard because a lot of people are very hurt for some reason or another by the Church or someone they associate with the Church. A lot of times, I encounter that anger and I really can't do anything about that. That's up to God to heal and them to surrender it, but it does make conversation difficult. Then there are also these wonderful, incredible appointed moments when I feel like I'm able to shed some light on something for somebody -- and who knows where that will take them. It's a pretty blessed place to be for me, so I love it.

I just finished reading a book by Peter Hitchens, who's the brother of notorious atheist Christopher Hitchens. Peter is a believer, and he says he doesn't think any kind of intellectual argument will ever convince his brother about God's existence. If it happens, he thinks it will happen because Christopher is struck by some piece of poetry or art that transcends everything. Do you have any experiences in your life where art completely transcended any kind of intellectual arguments for faith and pointed you toward God?

Yeah, I do. I was 5 or 6 years old and I used to love The Sound of Music. It was my favorite movie. I remember being struck by a few things. One was the stained glass in the Reverend Mother's office. The other, aside from the music, was when Maria gets married -- the Church building, the nuns, the Bishop with his vestments on. (There was) the aesthetic beauty of it. I remember forwarding and rewinding and watching that scene over and over. There was something in me at that age, I thought, "I know God inspired that. I just know it." And they were Catholic in that movie! I was not raised in a pro-Catholic house, but I think I knew that, regardless of religious affiliation, those beautiful things in that movie were in some measure (inspired) by God.