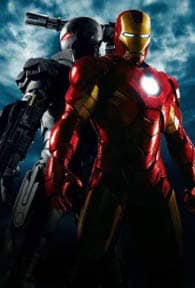 I was so excited to see Iron Man 2. Remember the first Iron Man? In that origin story, we fell in love with Robert Downey Jr.'s portrayal of Tony Stark, a technological genius who also happened to be a selfish, clueless, billionaire drunk. Then he found out that Stark Industries weapons were being used to kill both Afghan villagers and American soldiers. One of those villagers saved Tony's life and gave him a shot at redemption. He wasted no time, moving to shut down his company's weapons manufacturing in order to focus on developing his father's dream of providing the world with clean and renewable energy. That decision nearly cost him his life. And the suit was really, really cool.

Fast forward six months to Iron Man 2. Now the world is at peace because of Iron Man's iron cajones, and Tony Stark has fallen into his old ways. He drinks too much and takes crazy risks. He's self-indulgent and solipsistic.

Meanwhile, a villain with a vendetta has joined forces with Stark's main business rival with the hope of destroying the Stark name and the Stark legacy.

Who is this villain of the piece? It is Ivan Vanko, another technological genius, also selfish, and also a drunk. Vanko is not exactly Tony's peer, since Tony is a billionaire and Vanko survives by exploiting the Russian underground economy. But that's not the big difference between Tony and Vanko. The big difference is one of perception.  Tony is clueless; Vanko is not.

Mickey Rourke is brilliant in his role as Ivan Vanko. He has very few lines. Many of them are delivered in Russian. When he speaks in English, his words are badly distorted by his thick Russian accent and the perennial toothpick in his mouth. And yet he makes you listen. It is a riveting performance in an otherwise forgettable film.

It helps that Rourke's vengeful Ivan Vanko has the only dialogue worth remembering or pondering, after the credits roll.

When Vanko attacks Tony Stark for the first time, he is wearing a helmet that says "Intervention." And what an intervention it is! He nearly kills Tony before Tony figures out how to incapacitate him. As he is dragged away by the police, Vanko spits at Tony and laughs, saying, "You lose."

Tony doesn't understand this enigmatic statement until he visits Vanko in prison. Vanko is so silent that Tony wonders if he even understands English. But Vanko is just ignoring the prattle of this moronic billionaire until unexpectedly, he speaks. Here's what Vanko says:

You come from a family of thieves and butchers. And now, like all guilty men, you try to rewrite history and forget all the families whose lives you've ruined. If you can make God bleed then people will cease to believe in him. And there will be blood in the water and the sharks will come.

Vanko is content to spend the rest of his life in prison, because he wants only one thing: to watch the world's sharks consume Tony Stark.

(Of course, this is only the beginning of the conflicts unleashed by Vanko's anarchic anger. There is plenty more action to come. I suppose you might enjoy the movie, the way you might enjoy cotton candy when you're really hungry.)

Vanko is not implying that Tony Stark is God. Instead he is making a subtle -- and strategic -- observation about perception. Tony Stark's life and legacy depend upon the perception that his super weapon, the Iron Man suit, is unique, and uniquely effective. This makes it the most powerful weapon in the world. The point, then, is to undermine global confidence in the Iron Man suit. Once people aren't afraid, they'll be glad to try for a piece of Tony. Once Vanko has destroyed the perception of invulnerability, he doesn't have to fight Tony ever again.

He only has to sit back and enjoy the show.

Iron Man 2 falls apart precisely at this point. Mickey Rourke, as Ivan Vanko, hands director Jon Favreau a golden opportunity to rival Christopher Nolan's Dark Knight in creating a powerful commentary on the meaning of the savior in modern American culture. And Favreau is either not aware of it, or isn't up to the task.