Is the Tea Party Racist? 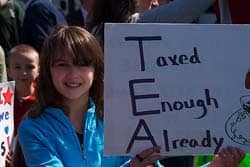 The charge that the Tea Party is racist is a perfect object lesson in liberal misinterpretation of conservatives. It is, of all the charges leveled against the Tea Party movement, the most inflammatory and the most politically damaging. Yet the accusation says more about the accusers than the accused.

Critics of the Tea Party point to a smattering of racist signs at rallies around the country, to the low percentage of minorities involved in the movement, and to a study that purports to show high levels of "racial resentment" among tea party supporters. These arguments are, however, mere justifications for a position already taken. Liberals were inclined to believe Tea Partiers racist even before such "evidence" was available. That is, the belief that Tea Partiers are racist is not an evidence-based belief. It is a belief in search of evidence.

What I propose, then, is the Theory of the Missing Motive. Since the education establishment has failed to convey a thorough and unprejudiced perspective on differing political points of view, even highly educated liberals possess a cartoonish, easily-dismissed image of American conservative thought. Liberals cannot believe that Tea Partiers are actually motivated by the passions and the reasons that Tea Partiers claim motivate them, because liberals in general are alienated from those passions and insufficiently educated in those reasons.

It is essentially a failure of imagination. Liberals cannot imagine themselves into a way of thinking in which conservatives do what they do and believe what they believe for good reasons. And since they cannot believe that conservatives are motivated by rational beliefs and admirable motives, they must appeal to darker, more primitive impulses to explain their behavior. The racist motive presents itself as a natural and convenient explanation.

Liberals, in other words, were always going to believe that a movement dominated by white conservatives is racist.

If you were not already inclined to consider Tea Partiers racist, you would not find the evidence compelling. I will treat the evidence -- the placards, the absence of blacks, and the "racial resentment" survey -- in turn.

1)  The rally signs are easily dismissed. I do not defend the signs themselves; some are juvenile, some ignorant, and some racist and hateful. It is plainly flawed logic, however, to conclude that the Tea Party movement itself is racist. Every movement has its fools and offenders. Counter-activists infiltrate the Tea Party rallies with misspelled or outrageous placards. And liberal reporters are attracted to displays of conservative idiocy like flies to honey.

If there were a higher percentage of racists at Tea Party rallies than in the general populace, would this mean the movement is racist? To answer yes is to confuse correlation with causation. Even a movement that has nothing to do with a particular -ism may arise among or appeal to a constituency in which that -ism happens to be more common. The vegan movement may, due to its history and location and demographics and even the set of beliefs associated with it, have a higher than usual percentage of anti-semites, yet this would not make veganism anti-semitic.

If some participate in the Tea Party with racist motives, perhaps because they loathe the thought of an African-American President, would this make the movement racist? Again, the answer is no. The human psyche is a complicated wreck, and when millions of people participate in a movement they will do so for a thousand different reasons. Any protest against President Obama, even if it were a protest against the continuation of the Afghanistan war, will provide an occasion for racists who seek to oppose Obama for any reason whatsoever.

Photos of rally placards are also used in a more subtle way to argue that the protestors are simply so angry and so exaggerated in their criticisms that they must be driven by racist impulses. Yet anyone who believes that the Tea Party protests are uniquely angry or offensive, or filled with Nazi comparisons and allusions to violence against the President, should take a stroll down memory lane in Bush-Hitlerville -- where "Kill Bush" shirts can be purchased alongside bumper stickers with nooses and signs of Bush beheaded; where you can take your family to visit a guillotine with a decapitated Bush at an Obama rally; where you can entertain yourselves by burning Bush effigies or watching "Death of a President" or making assassination threats on YouTube with your children; and where everyone from Nobel Peace Prize winners to Democratic governors and Presidential candidates speak openly of killing the President. Here are samplers of the anti-Bush signs merely from San Francisco and Los Angeles.