The following is a transcript from a Baccalaureate speech given by four young graduating women at Occidental College this past May. 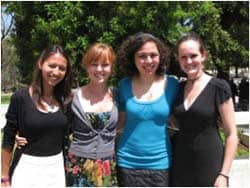 Hannah: As we looked back on our four years at Occidental College, we realized that in both our academic and spiritual lives we have learned how to ask, and attempted to answer, questions of all kinds. And as we look to the future, we face many more questions. So, as we begin to deal with what we want to do with our lives, we decided to return to our early years. When you were little, what did you want to be when you grew up?

Nina: I wanted to be a rock star/part-time detective.

Emily: I wanted to revolutionize transportation by inventing a personal pair of wings.

Hannah: I wanted to be a ballerina and save the sea turtles. What did you want to be when you grew up?

Allison: Because there's nothing better to do.

Hannah: Well, you're gonna need a better reason than that if you want to be a minister.

Allison: That was an actual conversation I had with my mother when I was about nine! We were in the kitchen. She doesn't remember it, but I assure you, it did happen. I didn't have a "better reason," but figured if I really was meant to be a minister I'd find one, eventually. By the time I was finishing high school, I had set my sights on a different career path -- psychiatry. And for that, I knew I needed a school with a science program and good results in terms of medical school admissions. I also knew I needed a small school, with a good choir, in a location that had warm weather. All roads led here.

After arriving, my first semester of college flew by, but something just wasn't right and nothing was quite "clicking." I had a church I was regularly attending here and a group of people with whom I thought I was building foundations for lasting friendships. But still, something was missing. I didn't have a group of peers that wanted to cultivate any type of religion or spirituality. The people I knew were more concerned with "finding themselves" and tearing down what they grew up with.

The only problem was the fact that they didn't bother to build up other beliefs or explore other beliefs. I was uncomfortable with the religious apathy and even disdain many students had for something I held so close. I figured, "Why fix something that wasn't broken for me?" So after my mother's insisting, I found a group of students who identified as progressive and Christian. It was a group where I could ask questions, worship with others, or just enjoy one another's company. And through involvement in this group, I was introduced to the Office of Religious and Spiritual Life (ORSL) -- a place that became like home during my time at Oxy. And it was my involvement in Progressive Christians Uniting (PCU) and ORSL that allowed me to realize a few things about myself:

First, chemistry -- and science in general -- was (and still is) not for me.

Second, my faith was a larger part of who I was (and am) than I had anticipated when looking at schools.

Two things have helped me clarify what I should be doing post-graduation: the apathy of the student body toward religion and spiritual formation, and the support this office provided for me as a student of faith. Had I attended another institution where more students identified themselves as students of faith, I am not sure if I would have realized the impact and importance it has been for me in my development as a person.