Buddhism's future is its past. What has occurred during the leap from one manifestation of our primal wisdom to the next? Cultures change but since Buddhas do not, the question really is how do perception, ignorance, and the filters of what we tripped over in the dark come to pass?

It has been said that time and Buddha have nothing to do with each other. Indeed, that Buddhism is a delusion, a concoction of thoughts about what Buddha might mean. A loosely translated good intention. A commentator on the Diamond Sutra teaches "delusion is the root of enlightenment" -- the best billboard yet along the path -- as we sharpen our mindfulness to the timeless quality of that which is other than impermanent, the original nature from which the long reputed ten thousand buddhas sprang.

There is a Song Dynasty tale of a pilgrim monk traveling on a mountain. Near the top of the mountain a wizened old monk -- or a mountain spirit -- sitting in front of a cave and watching the pilgrim approach raised a water bladder and offered a cup to quiet his thirst. The pilgrim, appreciating such a hospitable gesture, sat next to the old hermit and asked how long he had been in this place. The monk said he could no longer remember, but that he had long been quite at home sharing his cave with a "red eons old" spirit bear. He said he had stepped off the trail at the top of the mountain when he was about the pilgrim's age, and when he came across this cave and found no one else meditating in there, he moved in. He said he soon found he was indeed not the only occupant of the deep rock home. Further into the cave he found three very old skulls of very sizable bears that had ochre markings on their crown. He recognized that these were probably remnants of a much earlier age, perhaps even Neolithic in origin and that the cave he was sharing with them may well have, in an age before history, been a place of worship.

The old monk said the Buddha often spoke of being only the most recent of thousands of Buddhas and that he related in particular to Dipankara, his 24th predecessor, which, because of the great distances of time before each emanation appeared, could even have been a Neanderthal wise man, shaman, great mother, before language could remember them. Since the latent primal wisdom we call Buddha nature exists full-blown in human consciousness, why couldn't it have sprung from any human early or late on this plane or another at any time?

Buddhas, it was said, reoccurred after long intervals to serve humanity and indeed all sentient beings, when need arose. And the monk wondered if there might have been one of those earlier Enlightened Ones occupying this cave, perhaps even a Neolithic Buddha -- one who earlier had come directly from his or her timeless source and remained here because there was nowhere else to go, nothing else to do but offer an unadulterated dharma to those who, like himself and the pilgrim, had climbed the mountain.

He said he thought maybe this great heart was the source of the legend among the native peoples of the Yellow Valley who met this great spirit who roamed the forest, occasionally addressing individuals whose love was greater than their fear, and also came to those who in hermitage dreamed. During its walk-about closely examining everything it came across and offering healings, burial rituals, and shared silences that took the beholders "beyond the end of the world" on the leafy path beyond time or change.

This great red-eons-old spirit had long been invited into the prayers, contemplations, and meditations in that mountain's region, including even those who would take to the teachings of the Buddha some millennia later. Invited by Red Bear Monk to sit with him for a few days, the pilgrim shared a wonderful period of practice vibrating with just the spirit energy he was told he might.

In the dappled shadow of the forest invisible as monks in full absorption and as silent as the tigers that hunt them, all water is holy water. An invitation to liberation is gathering like the dew at the bottom of a coyote's paw prints.

The samurai learns humility in the perfect arc of the long sword. But the impeccable patience of reeds and salamanders need no practice, hidden years in the dry pond bottom, liberated by spring and the summer monsoons.

Gaslighting: How Dare We Expect Evangelicals to Fulfill Their Promises!
Cassidy McGillicuddy
4 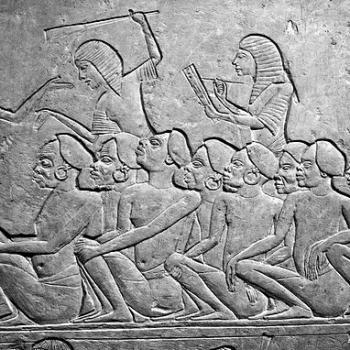 Archaeology: How Many Hebrew Slaves in Pi-Ramesses?
Dave Armstrong
Get Patheos Newsletters
Get the latest from Patheos by signing up for our newsletters. Try our 3 most popular, or select from our huge collection of unique and thought-provoking newsletters.
From time to time you will also receive Special Offers from our partners that help us make this content free for you. You can opt out of these offers at any time.
see our full list of newsletters
Editor's picks See all columnists