An interview with filmmaker Leanna Creel
By Deborah Arca Mooney 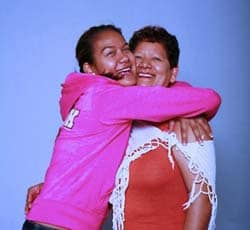 Three years ago, filmmaker Leanna Creel had never even heard of ICE (Immigration and Customs Enforcement).  Now, she and co-filmmaker Mason Funk are making the final cuts on a documentary about a mother and daughter who sought sanctuary in their church when the mother received her final deportation papers.  Sanctuary's Daughter shares the story of one family's journey to stay together and puts a personal face on the immigration system that threatens to break up four million young Americans and their undocumented parents.  I spoke with Creel on the phone recently about her film and the personal story behind it.

What inspired you to make this film?

Three years ago in July 2007, things got really, really heated with immigration here is Los Angeles.  ICE started doing raids in a neighborhood not too far from where I live in downtown L.A.  Families were nervous to send their kids to school because they were afraid their kids were going to come home and their parents wouldn't be there.  People were not going to the doctor when they needed to; it was just a very fearful, scary time.

Right around then, a woman in my church, Yolanda, got her final deportation notice. She'd been in the country for more than 20 years and had been fighting to stay in the country for many of those years.  I had known her and her daughter Anabella since she was 8 or 9.  Anabella had been in our church youth group and in a photo class I taught.  At the same time, completely independent from Yolanda's situation, our church, Immanuel Presbyterian (IPC), had decided to become supportive of this movement called the New Sanctuary Movement. Several churches in the L.A. area took in immigrants who had received their final deportation notice, and who were going to be separated from their American-born children. Immanuel was the only church affiliated with the NSM that offered sanctuary to one of its members.

Mason Funk, an Emmy-nominated filmmaker and fellow Elder with me at Immanuel, and I decided we should be following this story and started videotaping everything that was going on.  We started with their move into the church, and filmed them as they turned a storage room behind the choir room into a mini-apartment.  And that's where they've been living for three years.  Anabella is free to come and go, but her mother cannot leave.

So this was a very personal project for you.  These were people from your church.  Women you called "friends."

Yes, this story really found me.  Anabella was in my youth group, I watched her grow up, I've known her very well.  Immigration is definitely an issue that affects our community here at IPC quite a bit.   But it's affected my life, as well. My partner is an immigrant - and we've dealt with the fear of the process in our lives as well.  It's an issue that's very near and dear to me, especially the idea of families getting torn apart.

What did you find so compelling about the story that made you want to make a film about it?

Four million children in the U.S. are affected by the threat of their parents being deported.  So while it was a very personal story, it was also a story that we felt wasn't being told and we wanted to share this story with churches, synagogues and all people of faith.  We thought we could be on the forefront of discussing this very complicated issue, with a uniquely personal angle of how this is affecting families. When you see the news and you hear about the drug wars happening on the border, it seems very distant and theoretical.  But when it happens to someone you know and you watch families getting torn apart, it's a very different story.

When the church talks about "family values," this should be a top family value, for all people of faith.  Families should be not torn apart.  When man's laws break God's law, that's not right.

You say this is really a story about Anabella, more than anything.  What happened to Anabella in the course of making this film?

It's been an interesting three years.  The film has really become about how Anabella finds her voice.  At the beginning of the film, she doesn't really have a choice in what's going on.  She hides in the car when she doesn't want to be interviewed, she's really quiet.  But over the last three years, she's gotten more confident.  She's in college, she drives now, she's grown up and is trying to figure out what she wants to do with her life.  And she's started advocating for other families like hers.  It's just been beautiful to watch her grow, and I've had the privilege of watching that process up close and personal through the making of this film.