One of the initiatives of your term was to hold town hall meetings in every city you visited, and to create a space for these conversations about the future of the church. What were the top three issues that came up during these gatherings?

Surprisingly, the one thing that didn't get talked about a lot was sexuality. As much as a lot of folks want us to be caught up in conversations about ordination and marriage, very few people actually asked about it in our town halls.

The things that people wanted to talk about were, first, the future of the church with respect to young adults and youth (how do we attract them?); second, technology and social media; and third, as people who have helped to build this institution, what is our role in it now? That's what people are really yearning to talk about.

Our denomination is old. If you look around most churches, there are far too many 50- and 60-year-olds, and the Baby Boomers continue to hold the power in the institution. Many of us who see that are trying to figure out what our role is in helping to create what's next. Some of the Boomers are holding on and thinking they can think like they're 20-and 30-year-olds; others are saying no, our role is to nurture the next generation, so what do we do?

You know, there's a common saying in the church that "youth are the future of the church," to which someone else will say "no, youth are the today of the church." To which I follow up and say, "but they're not." For all intents and purposes, there's a whole generation of people that is missing from our congregations, so to say that "youth are the today of the church" is kind of lying to ourselves and a way of saying to ourselves we're doing okay, which we're not. One or two young people in your congregation do not a future make. Until we have young folks at a significant place at the table in thinking about the future, we're paying lip service to thinking about what's next. And then it's a bunch of us who become calcified, holding on to what we've always loved until it dies, and that's not what the church is to be about. And I think folks get that and are trying to figure out what to do with that.

So what do we do as a church to help encourage and nurture a community of faith that young people feel invited to, excited about, and drawn into?

Because I was raised in this denomination, it was important for me to acknowledge wherever I went the amazing work and legacy that has been passed on. At the same time, our response to the gospel is not about maintaining a legacy, but responding to the grace that God has given us, so if that's the case, then we have to figure out what is grace-filled about where we have been and respond to that.

I also tried to get people to acknowledge that the age 40 is older now! People would be like "Oh, 40 isn't old, I'm still young." That the problem -- we've adopted the American culture where we never want to grow up, so you have 40- and 50-year olds that think that they're still 20 and 30. Even though they lived as 20- and 30-years olds at some point, they have not lived as 20- and 30-year olds in the 1990s and 2000s. So their life understanding is drastically different.

I really push that we need to understand that our role is different as a 40-year-old than a 20-year-old. My role as the pastor at my church is to make sure that we always have more 20-year-olds than 30-year-olds, and more 30-year olds than 40-year olds and figure out a way that our leadership takes seriously that group. Our Session (church governing body) is a very young Session. I believe it's important that they are defining the future of the church, even when I don't get it! That's my role. Our boomers need to understand that their role is to usher in that next generation, not in a token way, but at a significant place at the table.

Is the PC(USA) as an institution doing anything specific to bring these younger people to the table?

One thing I try to help people see is that when a crisis hits and we start to think we're on our own and this is just happening to us, the reality is that this happening all over the world, this is everywhere. We can take some comfort in knowing that no one has really figured this out yet. So we're all in this same time of transition between very different world views, and the question is, how do you transform an entire organization built in the 1950s and ‘60s into one with a completely different world view, when the new generation doesn't exist within that institutional system?

At the same time, there are programs we have that we are reinventing a little bit. Our national Environmental Office has begun to see that there's a generation that cares differently about environmental issues, and so we've reinstated that office. Our World Mission division is now focusing on gender issues, trafficking, and environmental issues -- issues that young folks have generally been really interested in within the last 5-10 years. We're trying to tailor programs to come alongside those movements. 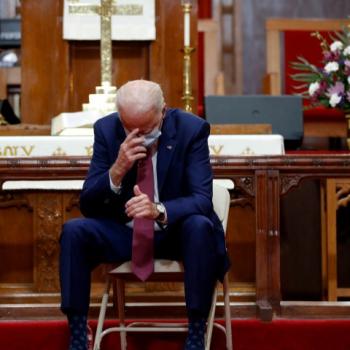 Joe Biden is Not a Heretic
Mark Wilson
4

Supreme Court Allows More California Churches to Worship in Person Despite...
Hemant Mehta
Get Patheos Newsletters
Get the latest from Patheos by signing up for our newsletters. Try our 3 most popular, or select from our huge collection of unique and thought-provoking newsletters.
From time to time you will also receive Special Offers from our partners that help us make this content free for you. You can opt out of these offers at any time.
see our full list of newsletters
Editor's picks See all columnists