American Football Is a Pagan Sport 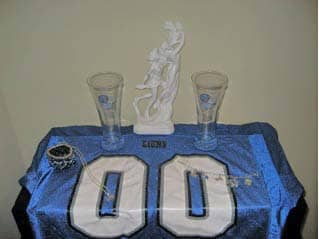 The crisp, autumn air sends chills of anticipation down my spine. I simply love this time of year. The time between Lammas and the Autumn Equinox brings football season and I can't wait. I am both Pagan and an American Football fan. I don't mean just a casual fan. I mean a fan that has all the accoutrements of fandom and who watches every game for my team of choice without fail (including at least one trip to an away game every year). I am a fan who knows the off seasons, knows the players, and knows the coaching staff. Based on conversations I have had before, this is sometimes jarring knowledge for others in the Pagan community. Certainly there must be a population of football fans in our religion, but overwhelmingly it seems to me that many Pagans consider American Football the sport of "other people."

I contend that football is, in fact, a Pagan sport. Allow me to explain. My main religious focus is Hellenic, so I honor the Gods and Goddesses of Ancient Greece. Ancient Greece as we know it was not a unified country. It consisted of many city-states that frequently engaged in war with other city-states. The most well known story is the Trojan War as depicted by Homer in the Iliad. And for the Greeks, war was very much a sport of the Gods.

When I watch an NFL Football game, I see it as a way to role-play war as a game of skill and strategy. In fact, the main reason I love football so much is that it is a game of strategy and not of chance. Every decision made, both on and off the field, affects the possible outcome of each game. In the off-season you have free agency where you work with established players and other teams to trade for the best possible roster. After that comes the draft, where the best and brightest players of college teams are available to be selected. Sometimes football players are considered dumb jocks, and some of them might be, but to get to the NFL many players attend some of the best colleges in the country. For instance, one of the star players on my team of choice is a graduate of Georgia Tech in the field of Engineering. After the draft there is more off-season decision-making, and then we arrive at training camp, the preseason, and finally, in the fall, the games begin. There are only sixteen games, most played on Sundays, and only thirty-two teams to choose from. The limited season and time commitment is another reason why football is my favorite spectator sport.

It is most interesting to compare each team's strategy, their offensive and defensive styles, to see how the game will be played. Every team brings varied combinations of players with different types of talent and different coaching staffs making the strategic decisions for the game. Then, on Sundays, a mini war game is played out by two city-states.

I view deities as being a part of the team process, just like they influenced ancient wars. Since I am Hellenic, I focus on Greek gods and I see associations like Athena in charge of the coaching staff and making the major strategic decisions. Apollo, "The Far Shooter," can be associated with the Quarterback to give him accuracy throwing the football. Ares rules over the offensive and defensive lines. Even the fans have divine influence of their own through Dionysos. There is a coin toss in each game, which I see as presided over by Hermes. Of course, then you have the individual heroes, like Achilles or Perseus, who can go beyond their human capabilities and make amazing plays no one quite expects. (Really, check out the video. It is an incredible cinematic take on the game of football inspired by Hitchcock. Oh, and it makes me weepy.)

You could even see each team as having a patron God or Goddess. I do honor a specific god in relation to my football team based on the association of that God with the team mascot. Some associations are easy, like the Chicago Bears being Artemis' team and Zeus backing the Philadelphia Eagles. Some associations are a little more complex like the Pittsburgh Steelers, which I see as Hephaistos' team. There are some teams that just can't be shoehorned into Hellenic mythology -- like the Minnesota Vikings, who probably belong to Odin.

Laura M. LaVoie has written for PanGaia Magazine, Lewellyn's Magical Almanac, He Epistole, and other Pagan publications. She is a member of the national Hellenic organization Neokoroi, is active in the local Pagan community and honors the Gods of Ancient Greece.

Reprinted with the author's permission from The Juggler, a Pagan culture blog.