My legal and advocacy work both in the U.S. and abroad has given me the unique opportunity to view challenges faced by the Muslim community in multifarious socio-political settings. What is clear to me is that the challenges faced, and to be faced in the coming century, by the Muslim community require the utilization of the same individual and societal instruments under evaluation. These include the appropriate and permissible application of individual and communal freedoms, the freedom as an individual to study one's faith and offer new and relevant interpretations of such, and the freedom for a community as a whole to practice its faith in the public and private sphere. And so, I see major challenges faced by the Muslim community in the 21st century as coming from two arenas: 1) intra-community differences -- such as disparate interpretations of gender roles, or differing theological and historical critical interpretations of the Quran; and 2) extra-community relations -- such as variant understandings of how self (Muslim) versus other (non-Muslim) should interact and the responsibilities of each toward the other.

Much of my legal and advocacy work while at the Becket Fund for Religious Liberty, a non-profit, non-partisan law firm that protects the free expression of all faiths, has been in Muslim communities in the Muslim world, particularly in Egypt and Pakistan, where the central short and long-term challenge is a government that is authoritarian and/or corrupt. State control of religion, whether through monitoring of mosque sermons or prosecution of "deviant" interpretations -- Shia, Koranist, Ahmadi, or even Sunni -- under national security pretexts, politicizes religion so that "Islam" ultimately becomes a tool to be manipulated by the state to best serve its interests. The realization of religious freedom, free speech, and other fundamental human rights is dependent on adequate checks on government power. With activists routinely imprisoned and harassed, the countercurrent to government restrictions is always struggling to gather momentum.

There is also a deeper misunderstanding among those in power about the nature of human rights. Human rights as articulated in international instruments are all too often dismissed as "Western" and therefore not only irrelevant to Muslims, but also dangerous because they carry with them an imperialistic agenda. Moreover, religious freedom is interpreted as part of not just Westernization but also the Christianization of the Muslim world. Recently in Morocco, Christian expatriates have been deported out of fear that their religious expression is disruptive to the stability of the country and represents the agenda of foreign governments. Similar deportations have occurred with Shias, underscoring again the intra-Muslim element to religious freedom restrictions.

Even among individual Muslims, the vast majority of whom are freedom-loving, there are several ingrained misconceptions about human rights. Religious freedom is conflated with anarchy, particularly of the sexual sort -- the misconception being that religious freedom is ultimately about freedom from religion, which for many Muslims is freedom from moral constraints and thus total freedom to succumb to hedonism.

Liberty is, as such, confused with libertinism, whereas in fact these two sorts of freedom are entirely distinct. The freedom to be a human being with rights, duties, and consequences for one's actions is different than freedom from constraints. Like authoritarian approaches to freedom -- the over-application of rules so that individuals are unable to make their own decisions -- libertine approaches infantilize people. Rules are needed to help shape and develop society, but if everything is regulated by the state, people can never learn to regulate themselves.

Religious freedom, rooted in human dignity, not only does not create anarchy but also in fact leads to more public order; societies thrive when people are allowed to freely and peacefully express their deepest held beliefs. External oppression of religious expression does not eliminate it but forces it underground, often causing it to mutate into violent, extremist forms.

In the realm of free speech and free religious expression, I have heard all too often that "rights are limited" -- that is, that we cannot conceive of rights without also articulating correspondent responsibilities and limitations. While this is no doubt true, and fully accounted for in every international human rights instrument, there seems to be a tendency among the Muslims I meet with abroad that the limits are somehow more important than the right itself. The limit -- whether in the form of blasphemy laws, apostasy laws, or anti-conversion and anti-proselytization laws -- is vaguely and broadly defined, thus leaving it to the whims of the individual, or worse, the government to interpret it as best suits its own interests. While theoretically, limitations make sense, as applied, the limit swallows the right. The push for anti-defamation measures at the United Nations is a good example of an attempt to "protect" the integrity of Islam by placing a restriction on freedom of speech. 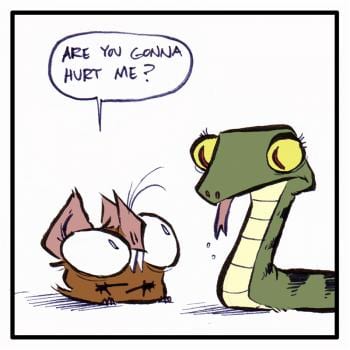 Alexander of Alexandria - The Well of Spiritual Life
Billy Kangas
4

If Low-Level Life Exists on Other Planets, What of God?
Jonathan MS Pearce
Get Patheos Newsletters
Get the latest from Patheos by signing up for our newsletters. Try our 3 most popular, or select from our huge collection of unique and thought-provoking newsletters.
From time to time you will also receive Special Offers from our partners that help us make this content free for you. You can opt out of these offers at any time.
see our full list of newsletters
Editor's picks See all columnists