Conversations from Chautauqua: Musings of a Meandering Pilgrim 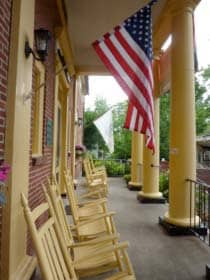 When I last wrote, I was on the island of Patmos out in the Greek Aegean Sea, following John the Beloved Apostle to his little cave where, in the tenth decade of his long life, he kept company with the crows and envisioned the end of the age and the coming of a new heaven and a new earth. So it is fitting that I continue my pilgrimage to the place where new visions (or nightmares) for the End Time were going to be discussed.

Quaint Chautauqua, near Jamestown, New York, sits along the edge of a clear lake of the same name; it is a village of thinkers, artists, writers, thespians, musicians, singers, dancers, and people of faith who come together from around the globe for nine weeks every summer. It is mostly a Victorian village with gingerbread houses, a magical place, dare I call it a "thin place," that has existed in a remote corner of upstate New York for well over a hundred years.

But this week the topic was anything but charming or relaxing. I always bring good books to read at Chautauqua in the wee hours of the night when I awake and sleep eludes me, and this time I thought I'd better bring a few extra. Somehow I scooped up one of my old favorites from Madeleine L'Engle, now of Blessed Memory, from The Crosswicks Journals, Book 3: The Irrational Season (Harper & Row, 1977).

I began re-reading this book early one morning while we were waiting for former Senator Sam Nunn to lay out the case for nuclear disarmament. I read Madeleine's words:

Long before I'd heard about the atom bomb or the hydrogen bomb, or fission or fusion, I feared the end of the world in much the same way that I fear a nuclear holocaust. And the description of the last day in the New Testament sounds very much like atomic devastation: "the present sky and earth are reserved for fire . . .  The Day of the Lord will come like a thief, and then with a roar the sky will vanish, the elements will catch fire and fall apart, and the earth and all that it contains will be burned up" (p. 3).

Later that morning, I heard the "good news": the threat of wholesale nuclear exchange between the U.S. and Russia, the kind we once feared would destroy all human life, is a lot less than it used to be. Then the bad news: a massive exchange between India and Pakistan could have nearly the same effect. Even worse: the most likely scenario is one bomb, one city. Imagine the consequences even of that, the speakers told us. I couldn't.

A nuclear holocaust would probably mean the end of human life on planet earth, but not the rest of the solar system, or the galaxy, or any of hundreds of billions of other galaxies in the universe. And nuclear warfare would be man's pride and folly rather than God's anger. . . Annihilation might follow an intergalactic nuclear battle, but annihilation is the opposite of what the eschaton is all about. It is not nearly so much a going as a coming, an ending as a beginning. It is the redemption, not the destruction, of Creation (p. 3).

Amen, dear Madeleine! And how she might have smiled hearing Senator Nunn and the other former "cold warriors" make the case for total disarmament! Possible? Maybe. I certainly hope so. And I will continue to pray that it will come to pass.  And that would be a New Heaven and a New Earth.

After a 35-year career as a therapist and counselor educator, Rebecca Cole-Turner now serves as a spiritual director, retreat leader, supervisor/teacher in spiritual direction training. Her practice is called HeartSpace Ministries. She is also a writer of prose and poetry.