An Interview with Michael Cromartie
By Timothy Dalrymple

Michael Cromartie is Vice President of the Ethics and Public Policy Institute, and director of its programs on Evangelicals in Civil Life and Religion and the Media. He also participates in numerous other ministry and government initiatives; he is a regular moderator for the Trinity Forum, and is a senior adviser to the Pew Forum on Religion and Public Life. He also served twice as chairman of the United States Commission on International Religious Freedom. He has edited fifteen books on topics such as natural law, religion and politics, and foreign policy.

For Patheos' series on the Future of Evangelicalism, he spoke with Timothy Dalrymple by phone.

There is a strong movement, led by people such as James Davison Hunter and Andy Crouch, to redefine Christian engagement with culture. Your stance is that engaging culture is not sufficient. Can you tell us about affecting society through politics?

It's not an either/or but a both/and proposition. Christians need to engage culture. And Christians who are called to the political arena have a real calling to work in a civil fashion for more just laws. Sometimes those who talk about Christians engaging culture want to diminish the importance of the political, and sometimes vice versa. I want to emphasize a Reformed view of calling, that we can do various things in various times and places in our various callings.

My task at the Ethics and Public Policy Center has been to educate and inform religious believers, especially conservative Christians, in how to be involved more wisely and prudently in public debate. While doing that, we need an Augustinian sensibility, because we can both be faithful in our calling and not have an overinflated expectation from the political.

When Ronald Reagan was elected, many people on the Christian Right thought that the Kingdom of God was arriving on Air Force One, and all things were about to be made anew. After eight years of Reagan, while much good was done, they felt deflated. In the same way, some of that happened when George W. Bush was elected President. The same will happen for progressive Christians who put the same kind of stake in President Obama. We should never diminish the importance of the political and we should never over-inflate the importance of the political.

What do you mean when you say that we need to adopt an Augustinian sensibility?

I mean that we need to adopt a form of Christian realism that recognizes that, because of the Fall, we live in a world that will remain sinful and broken until the end of time. While living in a broken world, our task, if it's political, is to help the state curb that brokenness and that sinfulness in a way that aims toward justice. I use the phrase "Augustinian sensibility" to lean against a Utopian temptation for people on the Right or the Left who give the political realm more significance than it should be given.

So it's a chastened view of politics, but it's not anti-political. People should have firm, clear political convictions on what justice means, without becoming so ideologically wired that they have over-expectations for what can happen in the public policy realm. It's a Christian cast of mind. Having that cast of mind can help nurture a form of Christian civility that is really important in these times, when we have a culture that is more shrill than ever.

One of the great representatives of political realism, in the 20th century, was Reinhold Niebuhr. Niebuhr is often cited as one of the current President's favorite thinkers and inspirations. Is President Obama practicing what Niebuhr preached?

The President seems to have a great admiration and respect for Niebuhr. People all over the political spectrum claim Niebuhr as their mentor. The question is: What part of Niebuhr has the President bought into?

That's a debatable proposition. When there's a problem, the President's instinct is clearly that the state needs to solve it. So there seems to be a lack of appreciation for mediating institutions and the roles they play, as the first instinct is to have government solve all of the many problems that we have. So it's not clear to me what part of Niebuhr he appreciates.

It is clear that Niebuhr's thinking on foreign policy has not influenced President Obama. Niebuhr knew the nature of totalitarianism and critiqued it constantly; he was anything but an advocate of moral equivalence. There's a tendency with President Obama, because he thought Bush bellicose, to believe that he ought to do the opposite. So rather than talking about the virtues of living in a free and democratic society, he has spent a lot of time apologizing for America's problems. 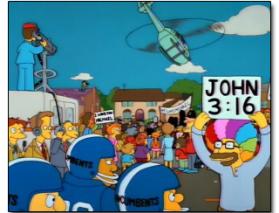 Returning to the Basics
Vance Morgan
4

Before I Went to Seminary I Thought That...
Michael Bird
Get Patheos Newsletters
Get the latest from Patheos by signing up for our newsletters. Try our 3 most popular, or select from our huge collection of unique and thought-provoking newsletters.
From time to time you will also receive Special Offers from our partners that help us make this content free for you. You can opt out of these offers at any time.
see our full list of newsletters
Editor's picks See all columnists