Elder Tucker's Drift: The Trial of the French Mission, Part One

Note by Ben Spackman, Portal Manager: This article is personal to me for two reasons. First, I served in some of the areas mentioned and second, I served under President H. Ray Hart. In light of his reaffirming mission policy to limit our study materials, I asked him during our first meeting what I should do with all my books. I'd acquired a library of about fifty volumes, on history, scripture, French language, etc., and had more on the way. He inquired as to my study and proselytizing habits and after reflecting for a bit counseled me to keep them and keep reading, as long as it didn't take away from my work time. In light of his mission experience and minor role in the following story, I've gained more respect and even a measure of surprise at that decision. As part of our partnership with Dialogue Journal, we bring you a condensed version of "The Trial of the French Mission." originally published in Dialogue: A Journal of Mormon Thought, vol. 21, no. 3 (Autumn 1988) pp. 27-45. For the full article and references, visit Dialogue's website.

Short, solid, bull-necked Elder William Tucker, Church of Jesus Christ of Latter-day Saints, would grip your hand firmly and ask earnestly, "How are you, Brother?" Elder Loftin Harvey, Jr., several months senior to Tucker in the mission, at first thought this new acquaintance was simply odd. Later, he, along with many others, would come to respect and admire Tucker, and finally their paths would be drawn together before a Church tribunal in which the course of Harvey's life would forever be altered.

To mission leaders and missionaries alike, Elder Tucker had the qualities of an ideal leader for proselyting. In September 1957 Harold W. Lee, Tucker's first mission president, pointed him out to another newly arrived missionary, Marlene Wessel, and said, "If you want to be a good missionary and baptize, watch Elder Tucker." Frank Willardsen, a fellow missionary, remembers his piercing eyes and aura of charisma. In person, he was quiet, soft-spoken, gentle, and confident. In public, he was dynamic and forceful. He was well-read in Church doctrine and engaged in missionary work with a gusto that caught the attention of the whole mission.

Early in 1958, Tucker became the second counselor in the French Mission presidency, and, in the absence of a first counselor, the only assistant to Mission President Milton Christensen. Tucker traveled in the mission frequently, con- ducting study classes with missionary elders, preaching over the pulpit to the French members, and performing the daily labors of tracting and contacting with individual missionaries. He was widely known and admired.

Yet unseen dissonance belied an orthodox demeanor. Tucker harbored many unresolved questions about the Church. A convert to Mormonism in California at age 15, he had immersed himself in a study of its history and doctrine. Intrigued by the former practice of polygamy and the many "mysteries" mentioned but not clearly defined in the statements of early Church authorities, he began to develop his own divergent conclusions and to question the teachings of modern Church authorities. His unorthodox notions, however, did not preclude his accepting a mission call.

In France he shared his conclusions with others. Conducting a mission within a mission, he sifted through the elders and sisters looking for his own harvest of receptive minds. Many began to credit his teachings above those of Church authorities, and to the many young missionaries who were attracted to him as a paragon of proselytizing, he opened a Pandora's box of doubt.

The matter culminated in September 1958, when all French missionaries crossed the channel to attend the dedication of the London Temple. Alerted Church authorities interviewed the entire contingent to determine their allegiance. Many repented, but nine were excommunicated after a trial that was without precedent in the history of LDS missionary work.

The nine were not all Tucker's confederates. In particular, Harvey, never party to the lengthy doctrinal trysts with Tucker or his inner circle, unexpectedly found himself sitting with the defendants on that September day in London. While the formal trial lasted less than a day, Harvey's inner trial of faith and testimony continued for decades.

The story of Loftin Harvey, Jr., is not, then, the story of the French apostasy. Rather, it is a study of testimony. While faithfully serving his mission, he was inadvertently entrapped in the web of Tucker's apostasy. His story raises questions of significance to those considering the nature of faith and adherence to that faith. 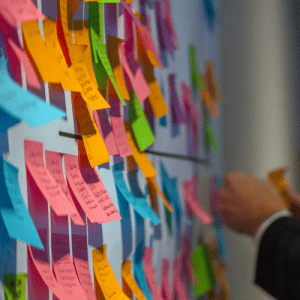 Watch "The Trial of the Chicago 7" gratis Feb 19-21: Netflix global viewing...
Sister Rose
Get Patheos Newsletters
Get the latest from Patheos by signing up for our newsletters. Try our 3 most popular, or select from our huge collection of unique and thought-provoking newsletters.
From time to time you will also receive Special Offers from our partners that help us make this content free for you. You can opt out of these offers at any time.
see our full list of newsletters
Editor's picks See all columnists