Future of Midgard: Heathenry Reaching Out for a Dynamic Future

Simultaneously with Christensen's work in the early 1970s, Steve McNallen created the Asatru Free Assembly (AFA), which focused more on religious practice than identity politics; membership, however, in the two organizations often overlapped. There was a strong movement in the 1980s to separate Asatru once and for all from its ethnocentric roots, which led to much more focus on the spiritual end of the equation: it was finally beginning to come into its own as a religion. Differing ideological factions founded several distinct national organizations, including The Troth and the aforementioned Asatru Free Assembly, each with their own diametrically opposed ideological stance on the subject of the importance (or lack of importance) of racial identity.

By the end of the ‘80s (after a period in which there was substantial cross-pollination with other Paganisms, largely through the influx of converts), I think it's safe to say that Asatru had lost its political overtones and the focus was primarily on restoring the religious practices of our pre-Christian forebears. The debate then became (and largely remains) on how that ought to be accomplished. It was at this time, I believe, that we began to see the development of distinct denominations within this religion. Because not every adherent focuses predominantly on the Aesir, one of the dominant families of Gods within the tradition, many found themselves preferring the more neutral term "Heathenry" to Asatru, and things just blossomed from there.

Today, contemporary Heathenry is in a state of tremendous debate and flux. Ideological debates over theology, self-definition, and the role of personal gnosis in general and liminal practices in particular (including but not limited to ecstatic mysticism, Deity possession, shamanism, and even such common activities as prayer and devotional practice) have come to dominate public discourse within these religions. This ongoing discourse has served to highlight the major ideological fault line within Heathenry: the conflict between a body of scholarship that Heathens term "the lore" and the validity of personal gnosis. For this reason, it is difficult to speak of one homogeneous Heathen community. It is far more accurate to refer to the Northern Tradition as being comprised of multiple communities that simply happen to share a common core cosmology. Approach and belief surrounding that cosmology may be dramatically and often radically different between denominations, particularly within the United States. This is the religious world that modern Heathens have inherited today.

So the question remains: what is the future of Heathenry? I don't know. When I first became Heathen in the early ‘90s, the idea that one could have a direct relationship with the Gods and receive inspiration and wisdom from that relationship was all but verboten. Very few were willing to discuss the personal side of devotion and those who did often faced tremendous community opprobrium. Since then, that has changed. Now, even if the topic evokes debate and disagreement, people talk about it. There have been numerous devotionals to various Gods published, and a thriving mystical tradition is slowly developing within the community. We're moving beyond debating the minutiae of lore and into the development of a core theology. We may not agree on all points (we definitely don't agree on all points!) but we're debating, discussing, learning, and growing. This, to my mind, is progress.

So I don't know for certain where we're going, but I know where I'd like us to be in five, ten, twenty years. I know where I'd like us to go. First and foremost, I would like to see more focus on honoring the Gods, over the lore, over the ideological arguments. In too many corners of Heathenry, the idea of devotion, of loving and serving the Gods is still extremely controversial. That is changing but it's an uphill battle. If we can find one area in which to unite as a religion, let it be this: that we pour out our devotion to the Holy Powers in every possible way, shape, and form and that we respect the infinite diversity possible in such an endeavor.

I'd like to see even more focus on honoring the ancestors. We do this in Heathenry. It is part of the spiritual foundation of the religion and this is good. I'd like to see this gain an even greater focus in day-to-day worship. Sometimes I still hear the old Eddic axiom "it is better not to give than to give too much" cropping up, always out of context too, and if I could see one thing over the next decade within Heathenry change, I would like it to be the realization that we can never, ever give too much to our Gods or to our dead. Ever.

I hope, as we continue evolving as a faith, that some of the controversy surrounding our mystics and spiritworkers, God-claimed, and shamans will die down. I think that as the impetus toward devotional work grows, this is likely to occur, though I doubt that such practices will ever make the average Heathen all that comfortable. That's okay. Simply to have these roles recognized as possibilities within the scope of Heathen practice would be a good start. 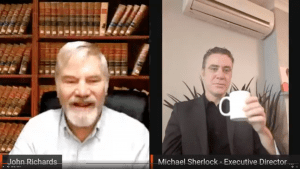 Ask our ED Anything!
John Richards
Get Patheos Newsletters
Get the latest from Patheos by signing up for our newsletters. Try our 3 most popular, or select from our huge collection of unique and thought-provoking newsletters.
From time to time you will also receive Special Offers from our partners that help us make this content free for you. You can opt out of these offers at any time.
see our full list of newsletters
Editor's picks See all columnists