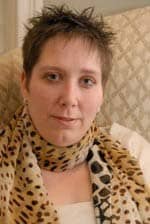 Galina Krasskova is a free range tribalist Heathen who has been a priest and godatheow of Odin for close to twenty years. In addition to being the founder of Urdabrunnr Kindred in NYC, she maintains membership in several other groups, including Ironwood Kindred (MA), Asatru in Frankfurt (Frankfurt am Main, Germany), and the First Kingdom Church of Asphodel (MA). Her primary interest is Heathen devotional work and she has both written and lectured extensively on this subject.

She spoke with Patheos' Star Foster.

Exploring the Northern Tradition is a really excellent introduction to Heathenry. What prompted you to write it?

I had wanted to write an introductory book on the religion for years. There is an awful lot of misinformation, ignorance, and misunderstanding surrounding not only Heathenry and the Northern Tradition, but Pagan polytheism in general. For those just coming into the religion, or interested in learning about it from an ecumenical standpoint, the sheer paucity of resource materials was daunting. At the time I was initially writing, there was almost nothing for the newcomer. People would be told to "just read the lore," but that's surprisingly unhelpful to someone hungry to learn about the Gods and hungry to grow in their new faith. Then I had the good fortune of publishing a brief article on Heathenry in the magazine NewWitch and from there an acquisitions editor at New Page books contacted me; and the rest, as they say, is history. New Page has been consistently wonderful to deal with and very supportive and helpful.

Your background is in Catholicism. How did you come from Catholicism to the Fellowship of Isis?

I left the church when I was twelve. At 18 and 19, I found myself hungry for some sort of spiritual connection. I reached out and it was the Goddess Sekhmet who answered. At that time, I didn't know anyone else honored Goddesses or Pagan Gods, but I set up a small altar to Her and got down to business: praying and stumbling along. Then through a co-worker, I was invited to attend a ritual held by a local Fellowship Iseum and I was so blown away by the beauty and power of the ritual and the spiritual commitment of the people involved that I began working with them.

You've mentioned you came to Heathenry through your devotion to Odin. Aside from Odin, what drew you to Heathenry?

I came to Heathenry because of Odin. Period. There was no other reason. I am Heathen because Odin wished it. At the time, I wasn't particularly thrilled about it either. I have found (and sadly still often find) that devotion to the Gods is sometimes lacking in my community. There's plenty of devotion to "the lore," but often it seems like very little to the Gods Themselves and long before I converted, this offended me greatly. Were it not for Odin, I'd have stayed my distance.

Of course, that was twenty years ago and like any religion, Heathenry is growing and changing -- in positive ways, I think. There's much more willingness to discuss devotional work now, to entertain the idea that one can have direct experience with the Gods and that this can be a good thing than there was two decades ago, and I chalk that up to the many devout and pious Heathens who refused to back down from the issue, and to hide their spirituality. We're a young religion and there are always growing pains to be gotten through after all. I think now is a particularly dynamic time to be part of this community because of that. I've come to appreciate being part of a tradition that has its roots in pre-Christian Europe and that respects and honors the ancestors (and we all have ancestors: it's not a matter of who they are or where they come from, but of learning to honor them rightly!).

In your book you discuss the nine parts of the soul. In Pagan practice you don't tend to hear the word "soul" used often, much less as an integral part of the physical body. Why did you choose to use the word "soul" rather than "spirit"?

I chose to use "soul" because it is the most accurate word. Spirit has connotations that do not entirely fit what I was discussing. Soul implies that connection to the Gods and gift of the Gods that is indwelling. There is a conscious corporeality to the soul, a connection with the flesh that spirit may or may not have. Also, working as I do in the interfaith community, and interacting with the New Age community, I have often heard the word "spirit" used indiscriminately for everything from Gods to spirits to guides. Spirit is too nebulous a term, open to far too much free interpretation. Soul on the other hand is very concrete.