In his article "Dharmic Plus Abrahamic?" Dilip Amin addressed the issues that face couples whose faith traditions differ. He particularly notes the underlying differences of faith expectations between those of a Dharmic tradition (Hindus, Jains, Sikhs, and Buddhists) and those of the Abrahamic tradition (Jews, Christians, and Muslims). Here Dr. Amin responds to comments made to his thoughts. 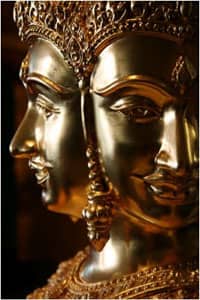 Tathagata Roy had serious objections to painting Muslims, Christians, and Jews with the same coarse brush called "Abrahamic." These three traditions are very different in some ways; for example, Jews do not proselytize, whereas Christians and Islamists do. Then again, Christians do it by persuasion (at least at present times), while Islamists do it by force. Thus, he implied that these three are very different.

Some one could counter this argument by saying that these three Abrahamic traditions are more or less the same. All three are monotheist, supremacist, and exclusivist. All three believe that salvation is possible only through their version of the faith or that they are the "chosen" people. All three believe in their own version of god and have not accepted each other's vision of the God. Further, all three believe that Hindus are "idol worshipers," and two of these traditions believe that on the Judgment Day, the idol worshipers will get the "Hell of Fire" while they will be "saved." All three traditions have based their scriptures on some variations of the Ten Commandments, that are supposed to be the stern injunctions from their "jealous God."

Being raised a Hindu, I was taught "Isvar Allah tero nam" (both Isvar and Allah are equally valid names of One God). Further, all those who have good karma will achieve moksha (salvation), irrespective of which path they follow. It is your karma, not the specific tradition, or name of God, that is important. Hinduism teaches that there is only One Absolute Supreme power and thus it is a truly monotheistic religion. But Hinduism allows abundant freedom of expression for the forms of God; therefore Hindus, in general, have no problem with the concept of Jesus or Allah as a God.

As a child, I was never confused by this all inclusive, pluralistic view. Contrary to that, leaders of all three Abrahamic monotheist religions believe that a child will get confused with teachings of two different faiths; therefore, parents in an interfaith marriage must pick one of the two faiths for their children. If so, then whose god will win? Followers of all three Abrahamic faiths expect a Hindu spouse and/or their children to undergo Baptism, Bris, or Shahadah-Sunat to publicly announce that their God will rule in their married life.

Jews may not proselytize but they consider interfaith marriages "Silent Holocaust." In a Hindu-Jew marriage, the Jewish partner may do any thing possible, including giving "conditional" love, to have their children go through the Bris ceremony and raise them in the Jewish faith only. To a Hindu spouse, and their children in an interfaith marriage, how does it matter what method -- force, persuasion, or conditional love -- is used when the ultimate result is the same: Baptism, Bris, or Shahadah-Sunat?

As Lisa Miller has explained, a Hindu believes there are many paths to God. Jesus is one way, the Qur'an is another, yoga practice is a third. None is better than any other; all are equal. The most traditional, conservative Christians have not been taught to think like this. They learn in Sunday school that their religion is true, and others are false. Jesus said, "I am the way, the truth, and the life. No one comes to the Father except through me."

Luckily, these days, the majority of Abrahamics are no longer exclusivists and are happily tolerating spouses from other faiths in their married life. According to a 2008 Pew Forum survey, 65 percent of Americans believe that "many religions can lead to eternal life" -- including 37 percent of white evangelicals, the group most likely to believe that salvation is theirs alone. As Lisa Miller has further stated, conceptually, at least, we are slowly becoming more like Hindus and less like traditional Christians in the ways we think about God, ourselves, each other, and eternity. Stephen Prothero, religion professor at Boston University, has long framed the American propensity for "the divine-deli-cafeteria religion" as "very much in the spirit of Hinduism. You're not picking and choosing from different religions, because they're all the same."