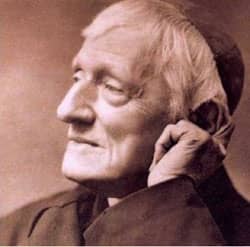 The beatification of John Henry Cardinal Newman on September 19 in Birmingham, England, may not draw much media attention, but it is still noteworthy.

Newman's beatification will be the first one Pope Benedict XVI has presided over. One senses that the theologian/scholar/Pope Benedict might feel a kinship with Cardinal Newman, a great intellect of the Victorian Age, and a figure of renown in both Anglican and Catholic traditions.

Newman was born in 1801 and died in 1890. He converted to Catholicism in 1845 after study and struggle to understand God. His efforts with the Oxford Movement to bring Anglicanism back to its Catholic roots led him instead to join the Catholic Church. Conversion brought no end of grief for him. Anglican scholars felt betrayed; Catholic scholars were suspicious. He must have felt quite bleak when he wrote in his journal in 1863. "O how forlorn and dreary has been my course since I have been a Catholic!" he wrote. "Since I have been a Catholic, I seem to myself to have had nothing but failure, personally."

He was a prodigious writer who promoted the need for the church to engage the world, a position that did not always make him friends. As a Catholic he fiercely defended the faith, to the point where he nearly went to jail for intemperate words while sparring with an anti-Catholic zealot.

He was a man of intellectual rigor, but his writings reveal a humanness too. He expressed it in his motto as a cardinal: "heart speaks to heart." A favorite poem, written in 1833, when he was 32, is "The Pillar of Cloud." It reveals both the intellectual quest for God for which he was known, and the deep reach of a soul, to which most can relate at some point in their lives.

LEAD, Kindly Light, amid the encircling gloom,
Lead Thou me on!
The night is dark, and I am far from home -
Lead Thou me on!
Keep Thou my feet; I do not ask to see
The distant scene, -- one step enough for me,
I was not ever thus, nor pray'd that Thou
Shouldst lead me on.
I loved to choose and see my path; but now
Lead Thou me on!
I loved the garish day, and, spite of fears,
Pride ruled my will; remember not past years.
So long Thy power hath blest me, sure it still
Will lead me on,
O'er moon and fen, o'er crag and torrent, till
The night is gone;
And with the morn those angel faces smile
Which I have loved long since, and lost awhile.

Sister Mary Ann Walsh is Director of Media Relations for the United States Conference of Catholic Bishops. She is a member of the Sisters of Mercy of the Americas and an award-winning writer who has been published in numerous publications, including America, USA Today, Washington Post, and Editor  & Publisher. Her latest book, Benedict XVI; Essays and Reflections on His Papacy, will be published by Sheed & Ward in September.