Preface: In the following essay, I talk a lot about the book Neopagan Rites: A Guide to Creating Public Rituals That Work, by Isaac Bonewits. In light of Isaac's on-going fight against cancer, and the resulting medical bills, I wanted to invite readers to show their support by sending their thoughts, prayers, healing energies, and donations to Isaac and Phaedra, by visiting their webpage or sharing some encouragement and blessings on their Facebook Fan page.

Although Pagan traditions generally emphasize practice over belief and tend to value direct experience of the gods above the articulation of those experiences in theological doctrine, there is still much debate and discussion within the community about who or what exactly the gods are, how we relate to them through ritual and worship, and why such relationships are necessary or beneficial. Like many Pagans, I have spent much time contemplating these aspects of my spiritual tradition. I often feel as though I'm moving in starts and stops, pursuing avenues of philosophical thought and mythological storytelling that can only partly express these half-seen soul dreamings glimpsed in the dark of Spirit. But once in a while there comes a flash of insight, an outpouring of what Druidry calls awen, or divine inspiration.

This happened to me recently while reading Isaac Bonewits' Neopagan Rites: A Guide to Creating Public Rituals That Work. Pondering his brief introduction to polytheology and the "worship bargain," I found myself suddenly struck by how deeply cultural assumptions can penetrate into our theologies and define our ideas about the nature of deity, even without our realizing it. In this case, Bonewits models his conception of deity and the function of ritual on the most powerful forces apparent in contemporary American society: the multinational corporations that dominate social, political, and economic life, the banking system that supports them, and the wide-spread marketing that helps create and direct consumer interaction.

Bonewits spends only a single introductory chapter addressing the question of theology, yet the theory he describes in those few short paragraphs have some broad implications worth examining more closely. The crux of what he says is this:

Every time you have a thought about a deity, you feed mana into that deity's energy pattern. If a lot of people think frequently about a particular deity, she or he can become very powerful indeed. It's as if everyone were making spiritual deposits in Mt. Olympus Savings and Loan. Every once in a while, to assist with the survival of his/her worshippers (and thus his/her own survival), or simply to encourage more mana to be deposited, a deity may decide (or be persuaded by a magician/clergyperson) to pay interest or dividends on those deposits of mana. This often takes the form of divine energy being given to or through a clergyperson to be used for magical or religious purposes, though sometimes the deity may simply release some of her/his/its power to an individual worshipper in the form of inspirations, personal spiritual strengthening, or actual miracles.

Perhaps one of the most striking aspects of this view is that the gods and goddesses of Bonewits' theology are distinctly and inherently limited. They need the worship and attention of human beings as much as human beings need their attention and aid, arguably even more so. Bonewits suggests, however, that the limited nature of deity is not only not a problem, but of great benefit and potential use for practitioners hoping to enter into the "worship bargain" freely and openly, without unhealthy groveling and self-abasement. He rejects the spiritual hierarchy inherent in much of Judeo-Christian theology, and compares his personal polytheology to the modern science of ecology, with its systems of balance and interconnection. But this ecological comparison is misleading, for his treatment of ritual and liturgy resembles less an organic, creative exchange of mutual relationship than a calculated business transaction.

Today's multinational corporations have replaced the lords and kings of the past, and even to some extent the prime ministers and presidents of today, as the reigning powers on the world stage. Ostensibly, corporate entities rise to power for the sake of their shareholders and investors, as well as the consumers who benefit from the products or services that these corporations provide and in turn support them in their growth through customer loyalty, word-of-mouth recommendations, and future purchases. The more people pour money into a given company, the greater that company's power becomes, thus enabling them to offer broader and better services and products for their consumer base. Customers are free to choose which companies and corporations they invest in, and the competitive nature of the market ensures an ever-changing milieu of diverse options all striving to offer the best. Although any given corporation is limited in its scope and market, an individual consumer can meet all of her needs by engaging whichever combination of services and products she desires from a variety of different companies. 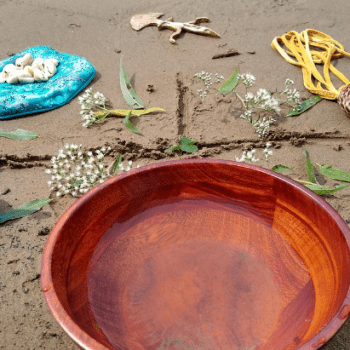 Resurrection (?) #5: Did Jesus Claim to be Our Savior?
Dave Armstrong
Get Patheos Newsletters
Get the latest from Patheos by signing up for our newsletters. Try our 3 most popular, or select from our huge collection of unique and thought-provoking newsletters.
From time to time you will also receive Special Offers from our partners that help us make this content free for you. You can opt out of these offers at any time.
see our full list of newsletters
Editor's picks See all columnists