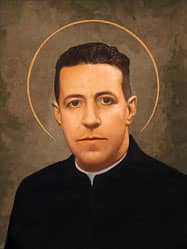 August 18th was the Feast of a Jesuit about whom perhaps you know little: Alberto Hurtado, S.J. Here's a brief reflection:

Alberto Hurtado was born in 1901 in Viña del Mar in Chile. Father Hurtado, canonized in 2005 by Pope Benedict XVI, was a man that many of my Jesuit friends actually knew. Today in Chile he is a national hero.

Alberto was born into a once-aristocratic family. When he was four, Alberto's father died, and the family, now impoverished, was forced to live with a succession of relatives. A scholarship enabled him to attend St. Ignatius Academy, a Jesuit school in Santiago. As a teenager, he spent time with the poor in the city's slums on Sunday afternoons. After graduation, Alberto considered becoming a Jesuit but his spiritual director suggested waiting until his family was "better situated," as Joseph Tylenda, SJ, writes in his book Jesuit Saints and Martyrs.

In March 1918, he began studying law at the Catholic University of Chile, and continued to visit the poor every Sunday. "He was incapable of seeing pain, nor indeed any need," recalled his spiritual director from the time, "without seeking a way to solve it." Though marriage held great appeal he decided to enter the Jesuit novitiate, which he did in 1923, at age 22. His discernment found confirmation almost immediately. "Here you have me, finally a Jesuit," he wrote to a close friend, "as happy and content as one can be on this earth!"

Alberto completed the standard formation of the Jesuit -- novitiate, philosophy studies, full-time work, and then theology -- before being ordained in 1933. Along the way he won the admiration of his peers for his charity, kindness, and prayerfulness. His vibrant personality gives lie to the stereotype of the saints as dour, gloomy types. "Being with him was so enjoyable because he made you feel so comfortable," said one friend. After his ordination, Alberto returned to teach religion to children at St. Ignatius, and to adults at the Catholic University, and also gave the Spiritual Exercises.

Hurtado's commitment to the poor endured. In addition to his teaching, he worked with the Chilean poor, especially the disadvantaged youth and young adults. In 1940, he was appointed director of "Catholic Action," a national youth movement. Questioning the country's commitment to the poor and taking aim at declining vocations to the priesthood, he wrote a provocative book entitled Is Chile a Catholic Country?

In 1944, Hurtado had an epiphany: a homeless man approached him on the street on a cold night. "A poor man, in shirtsleeves, suffering from tonsillitis, and shivering with cold, approached me saying he had nowhere to find shelter."

A few days later, while directing a women's retreat he recounted this experience to his audience, and asked them to turn their thoughts to the poor. "Christ is without a home!" he said. He continued:

Christ roams through our streets in the person of so many of the suffering poor, sick and dispossessed, and people thrown out of their miserable slums; Christ huddled under bridges, in the person of so many children who lack someone to call father, who have been deprived for many years without a mother's kiss on their foreheads . . . Christ is without a home! Shouldn't we want to give him one, those of us who have the joy of a comfortable home, plenty of good food, the means to educate and assure the future of our children? "What you do to the least of me, you do to me," Jesus said.

His impassioned remarks inspired the gathered women to pool their resources, which marked the beginning of the work that Alberto Hurtado is best known for: Hogar de Christo. (As one Jesuit said, this means that the women founded the Hogar!) Hogar means "hearth" or "home." Hurtado wanted to welcome the poor into "Christ's home."

In 1945, the first Hogar opened and quickly attracted volunteers; within a few years similar hospices spread across Chile. Hospices not only offered their guests shelter, they also taught them technical skills and Christian values. At the same time, Hurtado continued his retreat work, his speaking, and his work with youth. (At one point Hurtado came to the United States to visit Father Flanagan's famous Boys' Town, to study their operation and management techniques.) Between 1945 and 1951, some 850,000 children received help from Hogar de Cristo.

From all accounts Hurtado was an intensely busy man. In 1946, he bought a green pickup truck to better bring at-risk children living on the street back to the shelters. He called them his patroncitos, his "little bosses." In addition to his work with Hogar, his retreats and outreach to youth, he wrote several books and founded the journal Mensaje, a Catholic magazine designed to highlight the social teachings of the church, and which is still proudly published by the Chilean Jesuits.