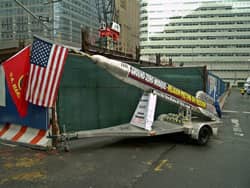 William Ewart Gladstone, perhaps the greatest of British statesmen, stood to speak to the British House of Commons on March 3, 1857, over 150 years ago. It was another country and another century, but the things he had to say that day still resonate. Gladstone was a classic Liberal (which is to say he believed in property rights, individual rights, and limited government with real fiscal constraints -- some might today call him a Conservative) who also believed ardently in what we would today call human rights. He came to the conclusion through political debate, theological study, and prayer that governments should safeguard these rights for their citizens -- for all their citizens.

On this particular day in 1857, Gladstone turned his attention to the matter of the day, a rush to war on the far side of the globe in response to hysterical claims, and he condemned the appeal that had been made to the House based, he said on "fear, which is seldom a rightful and noble sentiment," an appeal, in fact, based on "the worst kind of fear -- the fear of being thought afraid."

I sympathize with all those who are afraid of Muslim terrorists. I do not join them in that fear -- statistically speaking, Americans are as likely to die in their bathtubs as they are to be killed by terrorists -- but I am cursed by empathy, the writer's ability to see how other people think, live, and love. If I were a New Yorker, perhaps I would also be upset by the news that Sufi Muslims want to build a spiritual center in lower Manhattan, not far from the site of the World Trade Center attacks. Maybe I would think that all Muslims were up to no good, and that their so-called rights to freedom of assembly and freedom of religion should not trump my fear that they might be training terrorists to take down the Chrysler Building.

Maybe. But I doubt it. Maybe I'd see neighbors instead of enemies. A Daily News poll actually indicated that New Yorkers approved of the building by a two to one margin. So does the city's Republican mayor. And the state's Republican governor.

It seems almost useless to interpose fact into political or religious debate any more. As Brad Hirschfield wrote on FOXNews.com, Americans are increasingly drawn to the conclusions they wish to reach -- even if they have little or no basis in fact.

But I was trained as a high school debater, damn it, and while I know fear is a more potent influence on people's behavior than facts, I feel duty-bound to note a few actual facts about the "Ground Zero Mosque."

First, it's not a mosque. A mosque is a building set aside for prayer. There is a mosque in lower Manhattan, and there has been for many years. But this ain't it.

This building will be a community center. It will have a basketball court. It will have a cooking school. And there will be space for prayer, and hooray for that, but the building is not oriented toward worship.

It is not a mosque.

Second, it is not at Ground Zero. As I understand it, the building will not even be visible to the crowds who make their pilgrimage to the former World Trade Center site, but will be several blocks away.

Third, this is not and will never be a home for domestic terrorists. The Muslims who want to build this community center are Sufi, gentle, mystical people who are often persecuted by other Muslims. In July, in fact, a Sufi shrine in Pakistan was attacked by suicide bombers linked to the Taliban. The Taliban! The very people who want to destroy America also hate these Muslims for not being sufficiently something in their eyes.

I know and admire Sufi. They are generous, loving, and creative people. The great Persian poet Rumi was a Sufi. So was Kahlil Gibran. Sufi are Muslim moderates. They do not kill people who do not happen to share their Muslim faith. They are live-and-let-live people.

And yet, we do not seem willing to extend them the same courtesy.

Another 19th-century interjection: on another occasion, Gladstone said that the rights of Muslims (he used the dated term "Mohamedan") had just as much claim to respect as the rights of British Christians. This was a fairly radical statement at the time and remains important, given the climate for American Muslims after 9/11. I don't want to put Gladstone up for sainthood; he was a typical man of his day, and he probably considered Muslims to be both wrong in their faith and somehow beneath him. But even in his day and time, Gladstone recognized that all human beings are created by God, beloved by God, made in the image of God, and (as Thomas Jefferson once wrote) endowed by God with certain inalienable rights.