On Restoring Reverence to Sick Calls 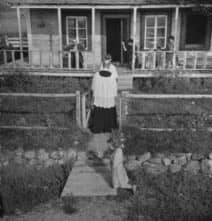 In my parish I try to visit the sick at least quarterly on a rolling basis to ensure they have had confession and anointing of the sick. But, since I am without an assistant priest, as a general rule, I depend on the men of the Holy Name Society and the women of the Sodality to ensure that the numerous sick in our parish are visited regularly.

At a recent meeting, a number of these Extraordinary Ministers of the Eucharist expressed a concern about reverence. When they make a sick call, the television is often blaring and the person to whom they bring communion is frequently unprepared by others in the home to receive Holy Communion. The extraordinary minister must ask that the television be turned down and that others might prayerfully participate. I too, upon visiting many of the sick encounter similar issues: loud TVs, other family members who do not understand the sacredness of the moment and a generally difficult setting in which to pray or reflect.

I do not blame either the sick or the family members for this situation. I blame myself and fellow clergy, many of whom, though not all, have failed to teach or to explain to parishioners and family members -- some of whom are not Catholic -- as to proper protocol in this matter.

We must re-catechize and teach on this matter. It will take time but, little by little, perhaps we can make progress toward restoring a greater reverence to sick calls, which, in general, have become very informal over the years. When the liturgy underwent sweeping changes in the 1970s many things were dropped -- though we were not directed to drop them -- whose importance we are now rediscovering.

In the "old days" the visit of the priest to bring communion and/or anointing to the sick was a matter of some formality. Most homes had a sick-call kit on hand that included things like a cross, candles, a cloth, cotton, and a bowl of water. If the priest were on First Friday rounds he might even be escorted by a server with a lit candle. At other times, a family member might greet the priest at the door with a candle and escort the priest to the room where the sick person was. In that room the "altar" was usually set up somewhat like the photo above. Family members usually stood by quietly while the priest administered the sacraments. If the priest did talk with the sick person or the family it was usually very brief. Since he possessed the Blessed Sacrament, casual talking was kept to a minimum. As he left, if he still had the Blessed Sacrament he was escorted by a family member with a candle.

All of this did vary based on location and circumstances. Emergencies might exclude some of the formalities. There were also ethnic differences; the catholicity of other family members and how devout each family was were also factors. But what is described here was the usual practice in usual circumstances.

As our culture has become very casual and informal, most of this has fallen away, but it may be beneficial for us to rediscover some of the older practices in order to restore greater reverence to sick calls. Here are a few matters of protocol to reflect upon, beginning with a few disclaimers, and suggestions.

Not everything in the list that follows is possible or even advisable in every situation. Sometimes sick calls are hastily arranged due to emergencies, and preparing a sick call altar might mean time away from a distressed or dying relative. Sometimes in nursing homes all the implements are not available or even allowed. For example many nursing homes would not allow the burning of candles. Hence, prudential judgment will weigh in on what is necessary, possible, and advisable.

Family situations may also affect the preparation of the sick call altar and other protocol. There may be no one in the home healthy enough to assemble the implements. There may be family members who are non-Catholic and choose not to participate in the rites and preparations.

Not all the implements shown above are necessary for every sick call.

Sometimes there will not be anointing and, hence a good amount of the things shown above are not necessary. Even if there is an anointing, it may not be necessary to do everything shown above. Here too, factors vary.

What follows are recommendations only. Not absolute requirements. The hope is to instill some thoughtfulness as to the reverence due the moment of a sick call. Reverence is not pure science. Externals can and do help but ultimately it is our internal disposition that is most important. Regarding these recommendations, take what you like and leave the rest. Add to them and distinguish as you wish. Discussion with your parish priest is also helpful.