On the Dire Need for the Imitation of Christ

A pall hangs over America and her churches. There is a sense not merely that our economy has fallen into a slump, that our political system has deteriorated, and that our culture has lost its way, but that something essential to our national character has been lost and may never be recovered. A sense not only that the greatness and prosperity of America have dimmed, but that whatever produced them in the first place may be gone.

My grandfather grew up on a farm in Iowa, the eldest boy in a brood of eight, and when my father's health required them to move to warmer climes, grandfather built a comfortable life for his family upon the strength of his body, mind, and soul. When asked how he was doing, he often answered: "Twice as well as yesterday, but only half as well as tomorrow." That was his sense of things. A conservative Christian pastor, he did not believe that the sins of the world were diminishing, but he did believe that American society had created the conditions for a more abundant life for his children and grandchildren. Few today share this sense. As Peggy Noonan recently wrote, "The biggest political change in my lifetime is that Americans no longer assume that their children will have it better than they did."

Forecasters of doom never run out of business, and I will not pretend to foresee a "coming collapse" of our society or our Church. But I will say that I am increasingly concerned not only that the material conditions of our prosperity (our economy and our government) are disintegrating, but that the deeper moral and spiritual conditions of our prosperity (the character and faith of the American people) have long since degenerated. What made America's democracy and economy so uniquely successful was not only the genius of her founding documents but also the character of her people, a character born from faith and nurtured by houses of worship. Yet now it appears that our collective moral musculature has so severely atrophied that it can no longer power and guide the engines of the American economy and government -- indeed, can no longer prevent those engines from flying off the rails.

With regard to the economy, we find ourselves asking whether this is not the middle of a Great Recession but the beginning of a Great Decline. The American economy was never driven primarily by greed, but by a strong sense of familial responsibility and the virtues of industry and self-reliance. A free market flourishes when the people within the marketplace believe in the dignity of work, the value of working hard, and the pride of working well. It flourishes when the culture emphasizes saving and spending wisely, living simply, dealing with one another honestly, and building loyalty between employee and employer, vendor and customer. Shame functioned as a hedge against shoddy work, broken promises, conspicuous consumption, and foolish debt. Today these virtues seem quaint, and shame is politically incorrect. What if our economy was sustained in recent decades by a combination of irrational exuberance, financial gimmickry, the magnetic attraction of American wealth to the best and brightest around the world, and the residue of Judeo-Christian morality? What if the same moral and spiritual capital that sustained the growth of our nation also gave a momentum to our economy that carried it forward even after that capital was spent -- yet now that capital is gone and that momentum has halted, and we have begun to slide in reverse? Perhaps we can no longer profit from the virtues of the previous generations and must now renew those virtues in ourselves and in our children.

With regard to the government, while the media has largely succeeded in marginalizing the Tea Party movement, the basic intuition of the movement is widely felt: that we are now governed by a ruling class that cares little for ordinary Americans and their concerns. Another, worse problem does not fall neatly into partisan categories: that our government is trapped in codependence with public sector unions on the one hand and Wall Street giants on the other. Federal workers now earn twice as much as their private sector counterparts, and Wall Street barons continue to extract hundreds of millions of dollars from their firms even as they destroy billions in shareholder value -- and both public sector unions and financial giants pull the strings of the marionettes in Congress, and both seem perfectly willing to impoverish the nation in order to enrich themselves. 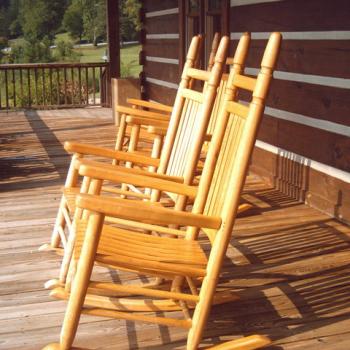 Was Jesus sinless? Did He "Doubt"? Does It matter?
Richard Ostling
3

Sometimes I Call it the Great Empty: A Mind Bubble on Zen in the West
James Ford
Get Patheos Newsletters
Get the latest from Patheos by signing up for our newsletters. Try our 3 most popular, or select from our huge collection of unique and thought-provoking newsletters.
From time to time you will also receive Special Offers from our partners that help us make this content free for you. You can opt out of these offers at any time.
see our full list of newsletters
Editor's picks See all columnists