Paganism in the News

Summer Solstice 2010 marked the thirtieth anniversary of Circle Sanctuary's Pagan Spirit Gathering, one of the first contemporary Pagan festivals I attended when I began my fieldwork in the early 1990s. News coverage of PSG and other Solstice celebrations was overwhelmingly positive, as suggested by the title of Grove Harris’s June 21, 2010 piece in The Huffington Post, "The Spiritual Meaning of Summer Solstice." On the same day, in a story onBeliefnet, Nicole Neroulias took a positive view of the healing ritual offered at PSG: “the Pagan Spirit Gathering in Missouri, one of the largest faith-based solstice events in North America, is conducting prayers and rituals to help the Earth heal from the oil spill in the Gulf of Mexico, and hasten the cleanup efforts promised by BP officials.” In the space of a couple of decades, Paganism has gone from being a dangerous or trivialized "cult" to a model religion helping its neighbors and facilitaing Earth's healing.

These sympathetic portrayals of Pagans in the news are a far cry from earlier media representations. In 1985, only twenty-five years earlier, the southern Indiana Brown County Democrat ran a story about local Pagans gathering in an Indiana state forest as “devil-worshippers in Yellowwood Forest.” Other negative news stories and controversies with neighbors followed across the U.S. and posed major public relations challenges to Pagan communities.

A few years later, my own research began under the misgivings of some of the professors in my doctoral program who did not expect Paganism to have a future. Much has changed since then, both in academia’s attitude toward contemporary Paganism and in the public face of Paganism on the American religious landscape. Public recognition of Paganism as a religious tradition alongside other religions has come a long way. Or as New York Times columnist Samuel G. Freedman put it in his October 30, 2009 story on Paganism and Halloween, contemporary Paganism is “Just Another Religion for Military and Academia.” This is not to say that all misrepresentations of contemporary Pagans as evil devil-worshippers have disappeared, but that such stereotypes are much less likely to be taken seriously by journalists.

A significant shift in representations of Pagans has occurred since the 1960s when news stories first appeared across the U.S. and the U.K. The improved treatment of Pagans in the news is due to a number of factors, including public relations efforts by Pagan organizations, the disproportionate presence of Pagans on the internet since its early years, Pagan news outlets, and the dissemination of some Pagan-friendly beliefs and practices into the culture at large. Pagans have also become increasingly willing to speak out to reporters and to mount campaigns against unfair treatment in prisons and the military.

Like other new religious movements, Paganism has most often appeared in the news when a controversy erupts. But the difference now is that these cases tend to be placed -- by Pagans and reporters -- in the context of religious freedom. This was what happened in 1999 during the furor over a Wiccan circle at Fort Hood Army base in Killeen, Texas, and in 2006, when Wiccans successfully sued the U.S. Veterans Administration to have the pentacle added to the list of religious emblems allowed on Veterans’ tombstones. In both cases, reporters and government agencies were inclined to take seriously Pagans’ right to freely exercise their religion, criticizing instead conservative evangelicals and others who wanted to restrict religious freedom.

But stereotypes persist in news stories that link Pagans with ritual sex and the exotic, if not the satanic. Suspicions of evil neighbors have faded now as many stories offer a more appealing good Witch-next-door. A Las Vegas Weekly cover story put it like this on May 5, 2005: “Oh My Gods! Sex Rituals, Arcane Rites and Homemade Cookies.” What made the Pentacle Quest such an important triumph, not just for religious freedom, but in terms of media representation, was that Wiccan veterans challenged all the stereotypes: evil devil-worshipper, sexy young Hollywood Witch, quaint Witch next-door, and dangerous cult member.

In the new millennium, it seems about time for prison officials, government agencies, the courts, educators, ecumenical organizations, and reporters to move beyond treating Pagans through stereotypes, even more positive ones. News stories featuring rituals for cleansing and healing the Gulf of Mexico BP oil spill offer a promising model for a different type of coverage and a new kind of public understanding of contemporary Paganism. 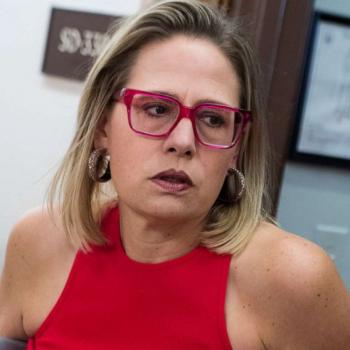 What Kind of Witch Do You Want To Be?
John Beckett
3

The Big Book of Magical Incense
Coby Michael Ward
About
Get Patheos Newsletters
Get the latest from Patheos by signing up for our newsletters. Try our 3 most popular, or select from our huge collection of unique and thought-provoking newsletters.
From time to time you will also receive Special Offers from our partners that help us make this content free for you. You can opt out of these offers at any time.
see our full list of newsletters