Pagans and the Tea Party 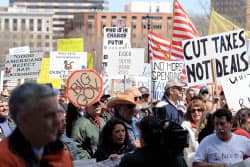 photo courtesy of Sage Ross
via. C.C. license at Wikimedia

I identify as liberal, but like most labels, it's a pigeonhole that doesn't accurately reflect my political views, anymore than the label Pagan gives you the nuances of my faith. So rather than assume that the Tea Party is conservative and therefore diametrically opposed to my views, I set out to look past the rhetoric and propaganda to what the Tea Party believes at its core. In its history, its media portrayal, and its core values, I found many things that resonated with me as a Pagan and a liberal.

Let me begin with a confession: I strongly believe in Reverence and Mirth. Often I tend to lean toward mirth, and that includes making fun of politics and religion. Do I pick on conservatives and Christians? Yes, but I also make fun of liberals and Pagans. I am an equal opportunity mocker. I didn't like George W. Bush's policies and mocked him mercilessly. I watch The Daily Show and The Colbert Report and can't stand Fox News. I recognize that conservatives mock Olbermann and Maddow, and lampoon Obama with impunity. It's part of the political landscape and a tradition as old as America herself.

Now even though I participate in this ridiculous junior high farce, I recognize that this really has nothing to do with politics itself. It's drama and entertainment. When I get serious about politics I find I actually have more in common with conservatives than the mythic rivalry would indicate. Whether you are a Yankees fan or a Braves fan, you're both still interested in baseball.

The first thing that struck me about the Tea Party is how it is misrepresented in the media, by both sides of the political spectrum. Like any movement gaining ground it has attracted its share of oddballs, and the way the media focus on the more absurd elements of the Tea Party is very similar to the way the media often find the weirdest, oddest Pagans to feature. Also, like the Pagan movement, its numbers are often inflated or deflated according to the perspective of the speaker.

The Tea Party is a decentralized grassroots movement, much like the modern Pagan movement, so getting a good feel of its size and opinions can be difficult. I found the most useful information on what the Tea Party is actually about, apart from rhetoric and propaganda, is a poll conducted by the New York Times/CBS News and the Contract from America.

It seems that the Tea Party is mostly made up of married, white, male Republicans over 45 years old. Tim suggests that liberals tend to dislike this demographic. I can only speak from my own experience but I can safely say that I have generally always found this grouping of Americans likable. Growing up in small Southern towns around construction and auto repair shops, this demographic formed the majority of my daily social and business interactions. So although I don't always agree with them politically, I do find this section of the American populace fairly amiable.

According to the poll, Tea Party members tend to think the taxes they already pay are fair, don't think Palin is presidential material, support Social Security and Medicare, are pessimistic about the economy, are unhappy with government spending, believe the ineffectiveness of Congress is a significant contributing factor to the current state of the economy, and feel their voices are not heard in Washington, D.C. They are critical of President Obama's performance so far.

At this point, as a liberal, I'm right with them. I voted for President Obama and, although I think he has potential, I have been less than pleased with his administration so far. While trying to be positive, the economy isn't looking good, and it's hurting my community. He's perpetuated the previous administration's power grabs and, while I understand the need for the economic stimulus package, the national debt worries me. Not to mention we are still losing American lives in wars overseas and basic rights for detainees still haven't been achieved.