The Purifying Power of the Sea 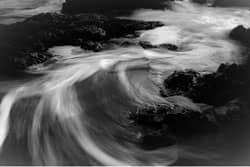 "The sea can wash away all evils." The ancient Greek playwright Euripides gave these words to the exiled priestess Iphigenia, indentured to the goddess Artemis in a strange land. Can seawater ritually clean her refugee brother Orestes, even of the blood-stain of matricide? Her answer to King Thoas is unequivocal. There is nothing the sea cannot purify.

"Where is the oil?" The slick is almost gone. As the various levels of "kill" -- top, static, bottom -- cauterize the oil-wound at the floor of the Gulf of Mexico, so the sea itself, the ultimate matrix, is doing the mighty work of dealing with what has already escaped from its deep-buried arteries: absorbing, dissolving, breaking down. An effective approach apparently must "kill" what has itself already done so much killing: marine life, economic livelihoods, the hope of a timely regional recovery from Katrina.

Failed deep-water drilling caused a puncture in the submarine floor that resembled nothing so much as hemorrhagic bleeding. This oil-blood, however, is a form of marine pollution that is incomparable to, for example, nuclear waste or chemicals. An organic substance trapped below the earth's surface, crude oil seeps continually into the sea floor in inconsequential amounts, and is consumed by microbes or dispersed by the deep. But like blood that is normally confined to subdermal vessels in the human body, oil is lethal when released in such quantities into upper strata, into ocean environments and coastlines where in nature it does not belong. It may be even more lethal when mixed with chemical dispersants. Millions of gallons of the 200 million barrels of oil released into the Gulf remain unaccounted for. How great are the sea's cathartic powers?

The anthropologist Clifford Geertz wrote in 1983, "Theory, scientific or otherwise, moves mainly by analogy, a ‘seeing-as' comprehension of the less intelligible by the more [such as] the earth is a magnet, the heart is a pump, light is a wave, the brain is a computer. . . ." But the imagination does not usually see the sea in terms of other things. The sea is irreducible. Instead it is the metaphor for other kinds of vastness. One speaks of "a sea" of grain, blood, ink, or deep space (where astronomers in 2003 named a planetoid discovered at the edge of our solar system Sedna, an Inuit name for the sea's animate, mercurial persona).

The first human response to the ocean was almost certainly religious: primordial and uninhabitable, it swallowed bodies and did not give them back, except at the awful end of time, as in the New Testament book of Revelation or the medieval Hindu Shiva Purana. Composed of ancient purifiers, salt and water, the sea was divinized, in part, because it never ceased to transform what went into it. With its complex choreography of waves, tides, and currents, appearing to pour over the horizon even after the world was known to be round, the sea, unlike any bounded river, was a theater of dangerous journey and metamorphosis. Its names, deities, and daimones in world mythologies are a cast of protean, hidden characters: Poseidon, Amphitrite, Tethys; Tiamat; tehôm, Leviathan; Olokun; Iemanjá; Wata-tsu-mi; Tangaroa; Nuliajuk; Samudra, Vadava. To its deepest zone, the trenches, extending down to almost 36,000 feet, oceanographers gave a mythical name, the Hadal, after the Greek underworld: unseen, lightless, where none but the dead should dwell, viperfish, jellyfish, and tube worms thrive near thermal vents, long adapted to fantastic amounts of pressure that destroy other species.

Despite its rising, toxic alkalinity, its widening gyres of particulate plastic in both Atlantic and Pacific, and the unnatural black flood unleashed this spring into the sparkling Gulf, the sea is still awesome, still omnipotent as it encircles and washes over 71 percent of the globe. And despite our use and abuse of it as a "resource," we continue to respond to it on a spiritual level. It keeps its many names and denizens, its countless secrets. We know that it is far more powerful than we are, able to kill us as individuals in a heartbeat, even as we as a race are killing it by inches. Its actual vulnerability is hard to accept, and prevents us from doing more to protect it from poisoning.

It is true that British Petroleum had no plan B. But it is equally true that in an industrial society, the Deep Water calamity exposes our faith in an age-old idea about the supernatural sea, namely that it always has the power to neutralize whatever might contaminate it. No one knows whether this is true -- or if Iphigenia was right. Despite our cruel national initiation into a catastrophic oil spill, the response of the sea remains to some extent, as it always has, a mystery.