Regulating the Gods: A Hellenist on Hubris 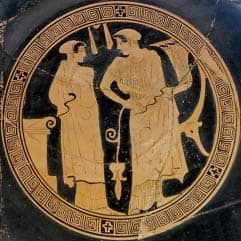 What is a god? Part of what theology explores is the nature of the divine, seeking to apply definitions and put concepts into neat little boxes. It's our nature to do that. So we ask questions. I'm not a theologian and I don't pretend to be, but here are my thoughts on the nature of gods.

To me, a god is a divine being. I don't have classifications and criteria for dividing up divine beings, putting one into the god category and another in some other category. I realize these classifications exist and people find value in being able to separate them, but I haven't seen the need.

I can't help but wonder if our need to define some divine beings as gods while saying others are not is a holdover from the tortuous logic puzzles we had to endure when we were Christians. Like many Pagans, I'm a convert and I'm constantly finding ways in which my native faith still shades my understanding of Paganism. We take it for granted that Christianity is monotheistic, but even while I was a Christian I saw it as nothing of the sort. The insistence that there is only one god because other divine beings such as angels and demons don't really count has always been difficult for me to understand. It is an argument based on defining what is and isn't a god by how powerful the being is. All powerful? That's a god. Anything else is inferior and since god is perfect, an inferior being cannot be a god.

I challenge this idea that, for lack of a better word, a 'less powerful' divine being is inferior in importance and not worthy of being classified as a god. Although mighty Zeus can chain or destroy the family gods I worship, our Agathos Daimons are not inferior. Not to me. They are divine beings worthy of honor and worship. They are tied to my family only and have a desire to see our family stay strong and connected to one another. I have a personal relationship with them and they intercede on my behalf with other gods, who can be more remote or have larger concerns. This was true in ancient times and I have found it is true today. The ancients didn't hold the Agathos Daimons as less important beings, but held them in the highest regard. They were given a special place of honor in all households and one day a month was set aside as a religious observance just to honor them. This is in addition to the daily prayers and offerings of incense and wine.

Another concept that I believe Pagans have brought over from Christianity is the idea that new gods either don't exist or are just thought forms. Jehovah was there from the beginning and will be there forever and since he is the only true god, revealed or newly created gods must be false. After all, gods must have always existed and will always exist or they aren't 'good enough' to be a true god. If they can be created, they can be destroyed and who wants to worship a god like that? It is a kind of conceit, that way of thinking. Wanting to pray to only the best, the strongest. To think yourself so wonderful that you must find a god worthy of your worship.

Gods are part of the natural order, as are we. Most of them were not in existence before the dawn of time and most will not exist forever. Some have been around much longer than we suspect. Columbia, a revealed goddess, has probably existed since the land beneath our feet was formed. We may not have known her, humans didn't even exist yet, but she was there. Was Columbia always her name? Does she care what we call her? Did the first person who applied the name Columbia to her make it up, or was the name placed in their head by the goddess herself, with the person unaware? That the person may not have recognized Columbia as real is beside the point as a god doesn't need a human to acknowledge her existence for the god to act. Does the fact that Columbia waited so long to reveal herself to us mean she isn't a real goddess? Not in my opinion. Who are we to place these rules and regulations on the divine?

As for gods who are created, it has happened in the past and will happen in the future. Athena was created by Zeus. Heroes are made divine by the gods that they please in reward for their deeds. Our ancestors, those that retain their sense of self, become divine. And perhaps that's what really makes a god. A being who retains a sense of self beyond the veil of this mortal life.

Our family has a new god, a new Agathos Daimon. In June of 2008 my grandmother Selma died. My grandmother was one of the kindest, most loving persons you could ever meet. She always put family first; she was devoted to us. Once you were family you were always family. Divorce, prison, and drug use could not drive her away from you. At times this frustrated me and pissed me off. How could she consider these people family? She never gave up on anyone. Never raised her voice and always had a huge meal ready. That woman could cook and she understood the bonds that shared meals create. She held our far-flung family together through some very trying times.