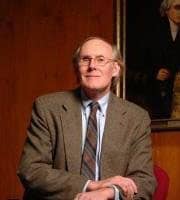 My first book carries a rather Puritan-esque title -- The Battle for Hell: A Survey and Evaluation of Evangelicals' Growing Attraction to the Doctrine of Annihilationism. It builds on the thesis work I did during seminary. Much of the book is a critique of Clark Pinnock's later work, especially where he moved away from the traditional teaching on hell to what is called "annihilationism" or "conditional immortality."

During my research and writing, I wanted to make sure I was accurately representing Pinnock's position. My first correspondence with Pinnock was in December of 1991. Professor Pinnock was quick to respond. He could not have been more gracious. He offered to send me materials that had not yet come out. He provided detailed feedback on my work, although I am sure he had much better things to do with his time. Pinnock candidly stated where my writing lost focus or grew unpersuasive, yet he treated me with both respect and kindness throughout.

Before my book came out, I approached four scholars to consider endorsing it. I was elated that all were willing to do so. Three (J.I. Packer, Wayne Grudem, and Dallas Willard) are proponents of the traditional view on hell. The fourth was Professor Pinnock. His generous blurb revealed much about this man's character:

In a day when prominent evangelicals are charging that to view the nature of hell as everlasting conscious torment is hideous and unscriptural, a burden to the church and a blot on her message, it is only natural that defenders of tradition would arise with a reply. Moore is a worthy defender -- his book is fair and well documented and I commend it.

Here I was, a young, aspiring theologian taking an older, established theologian to the proverbial woodshed -- and there he was, complimenting and commending a critique of his own theology. What a model to see Professor Pinnock's response!

I will never forget the generosity and humility Professor Pinnock showed me. In one of his book's titles, Clark Pinnock described God's mercy as "wide." Maybe that is why Pinnock was so quick to show such extraordinary kindness to a greenhorn student of theology. May God be merciful to him, and let the living take note of Professor Pinnock's model of Christian piety.

David Moore is founder and president of Two Cities Ministries. David has spoken at universities and churches on a variety of topics, and has presented at conferences in Canada, Mexico, Poland, Croatia, and France. He has also spoken at numerous professional baseball and football chapels for teams such as the San Francisco Giants, Chicago Cubs, Kansas City Chiefs, San Francisco 49ers, and Chicago Bears.

David is the author of three books, most recently The Last Men's Book You'll Ever Need. He has also written essays for publications such as Bibliotheca Sacra, The Huffington Post, and Touchstone. Follow him at http://www.twitter.com/DGEMoore.