By Marci A. Hamilton 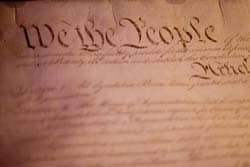 Pastor Terry Jones may or may not burn Korans someday, but President Obama passed up a golden opportunity. When Jones announced that he would observe 9/11 by burning Korans, and General Petraeus weighed in with his perspective from the terrorist battlefield, and the debate escalated, Obama should have painted our constitutional landscape for the world.

Here is what the President should have said: Jones has a solid constitutional right to burn any book he wants (assuming fire codes are met). But the First Amendment prevents the government from burning or censoring books. That is what makes us different from al-Qaeda, Iran, and Shari'a law.

Jones has a right to believe anything he chooses. That right is absolutely protected -- the government cannot tell any American what to believe. That is what makes us different from al-Qaeda, Iran, and Shari'a law.

The rest of America has an inalienable right to criticize Jones for his decision to burn the Koran. Just as Jones's speech is protected, so is his critics'. The American constitutional system rests on the necessity of open and often heated public debate. No "sensitivity" can prevent the press from publishing critical political cartoons about Mohammed or the pope. That is what makes us different from al-Qaeda, Iran, and Shari'a law.

Imam Feisal Abdul Rauf, who is the Muslim cleric proposing the Islamic Center two blocks from Ground Zero, has the right to build a mosque anywhere in New York so long as the plan satisfies the land use code. The First Amendment plainly condemns discrimination against any religious believer or group. As Mayor Bloomberg pointed out, there is no "mosque-free" zone. Because Rauf's project satisfies the land use code, the Constitution prevents New York or any other government from rejecting or impeding the plan based on religious identity. That is what makes us different from al- Qaeda, Iran, and Shari'a law.

The rest of America has an inalienable right to debate Rauf's plan to choose a site two blocks from Ground Zero. Again, the First Amendment fosters such lively debate, partly because it is safer to permit zealots to vent than it is to tamp down their fire, but also because the more views that are circulated, the more likely it is that the truth, or at least a better vision, will emerge. That is what makes us different from al-Qaeda, Iran, and Shari'a law.

And then President Obama should have reinforced our dedication to defeating threats to our constitutional order. He should have said:  Here is the line we draw. Beliefs are absolutely protected, speech is highly protected, but conduct can be regulated. So Jones and Rauf and every other American can talk, and criticize, and even rant. But they cannot kill or maim people whether they are religiously motivated or not.

Instead, Obama chose to emphasize our defensive position against the terrorists - he said that Jones should not burn Korans because it would be a "recruiting bonanza" for al-Qaeda. By taking that tack, Obama conceded far too much ground. So what if Jones's act offends the radical Islamicists? Our culture every day is a recruiting bonanza for al-Qaeda. Our freedom, especially the rights we give women and the protection we give children, violates their most cherished ideal of patriarchical, dictatorial control. Let's face it -- Fashion Week in New York is more than enough to send them off to their bomb-making huts. Jones's publicity stunt is a tiny act compared to the offense the al-Qaeda recruiters take at the foundations of our culture. We can't hide the Joneses and we can't hide our gender equality laws or the laws that would throw in prison anyone who stones a woman for failing to wear a headscarf.

Obama should have taken the offense, and said, "That's right, General Petraeus, the enemy would be offended by Jones's antics. They rioted in response to political cartoons of Mohammed, for goodness sake. But their sensitivities cannot drive our decisions or actions. Our deepest constitutional values are at stake in this war, and we must fight against the enemy that recruits to crush those values into submission to a religious dogma. So, General Petraeus, your job continues to be the same: root out the enemy to protect our rights."

The President must stop appeasing religious believers engaging in criminal acts or we are lost. His State Department and the Department of Justice twisted the law into a pretzel to argue that the Vatican should be immune from its responsibility for child sex abuse by priests. Luckily, the Supreme Court refused to adopt their reasoning. Now he is concerned about spurring on the enemy rather than explaining to the world why our Constitution lets a clown like Pastor Terry Jones hold his Koran-burning circus but at the very same time condemns the radicals' murderous, religiously-fueled plans. Please, Mr. President, trumpet our values, rather than permitting your rhetoric to be defined by their reactions.

So as we observe 9/11, let us remember that the hijackers took down the Twin Towers but their target was our constitutional order. Instead of burning Korans, let's embrace our Constitution.

Marci Hamilton is a constitutional law professor at Benjamin N. Cardozo School of Law, Yeshiva University. She can be reached at hamilton02@aol.com.