The Double-Helix of Religion: A Spinning Future

Predicting the future of religion is much like predicting the future of ecology. Environmental cycles will continue to turn as long as the Earth is spinning in the solar system, so "ecology" itself is in no danger. The vital ecological question is: Will the human species survive in future cycles of life? The same thing is true about faith, which inevitably will continue and some argue can survive even without humanity. The real question is: Will our current religious traditions survive in some recognizable form?

As these thoughts are published, I am returning home from a 40-day, 9,000-mile trip around the United States, talking with Americans about the future of our country and the values that might unite us in this time of record anxiety. A newly released national survey by Dr. Wayne Baker at the University of Michigan's Institute for Social Research reports that more than 90 percent of Americans say they love the idea of this nation we call "America," but a record 99 percent of Americans say they are concerned about their financial security. Pride in our country is a longstanding American value, but the latter number represents a startling spike in anxiety, Baker concludes.

In dozens of articles I reported coast to coast for www.ReadTheSpirit.com and The Detroit Free Press, I found ample evidence of that fear. It's not simply a wave of panic. Americans have a great deal to fear very close to home: loss of jobs, houses, and health care are among the leading crises shared by millions. But, wherever I roamed, I also found vibrant, creative, resourceful faith fueling the survival of individuals, families, and entire communities.

In the deep woods of northern Minnesota, I spent a day with a traditional Ojibwe craftsman, musician, and healer whose family preserves their traditional language and culture. They don't accept a dollar in public funds and they're able to thrive virtually off the grid of utilities on which the rest of us depend.

Along the far eastern edge of New Orleans, I visited with Vietnamese-American Catholics who have survived the tragic war in their homeland, hate crimes in their adopted U.S., Hurricane Katrina -- and now? At the moment, they are prayerfully expecting to survive the oil oozing across the Gulf of Mexico and a collapse in the wholesale price of shrimp, which is a matter of life and death in this shrimp-fishing community.

On a mountaintop in North Carolina, I found a former rock star who now is recording traditional hymns and releasing them to inspire other Americans.

In a downtown Atlanta skyscraper, I interviewed an Orthodox Jew who lives faithfully following traditions handed down through the millennia, even as he edits a cutting-edge online news service helping subscribers spot exciting innovations in eco-technology.

What's the future of religion? First and foremost, it's obvious that this timeless resource is alive and well in every corner of the U.S.

But the sharp-edged truth in all of these stories we published is that the powerful force of this faith is generated by individuals, families, and small communities agreeing on their own ways to preserve and draw upon their traditions. The once-potent idea that religion must be accepted as an authoritative revelation of the Divine has been replaced by religion as a quest for spiritual solace and moral strength to make it through each stressful day.

That's not necessarily a change in the shape of religion. Throughout human history, religion has been a double-helix, constantly turning. The DNA of religion contains two strands: authoritative revelation to be accepted and spiritual quest to be pursued. All of the world's great religions depend on both strands. The genius of Islam lies in the twinning of submission and pilgrimage. In Christianity, there is both humble acceptance and the search for vocation. Buddhism teaches both acceptance of ancient wisdom and personal mindfulness of each breath and step. Down through history, that double-helix of religion keeps turning, showing one strand more forcefully than another in different times and places.

Now, at the end of the third millennium's first decade, the unsettling pace of global transformation is causing billions to scramble. All sources of authority seem to be flattening. The power to search, to quest, to map our spiritual paths now lies in our individual palms.

While most Americans may assume this first decade of the new millennium is "the 9/11 decade," the truth is that historians are likely to record this as a global "handheld decade." We have not yet reached the ten-year anniversary of iTunes. The iPod didn't debut until October 2001. BlackBerry's true smartphone didn't come along until 2002. The iPad was released just months ago and already is in millions of Americans' hands. And, in undeveloped nations around the world, powerful cell phone networks, charged by motorcycles and gas-powered generators, are expanding faster than clean water systems. Tweets, posts, and cell-phone videos are the markers of global transformation from palm to palm. 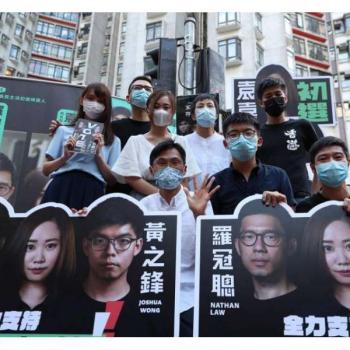 It's Orwellian, But Not The Way You Think
Mary Pezzulo
3

God is Not an Old Man in the Sky. Now What?
Jonathan MS Pearce
4