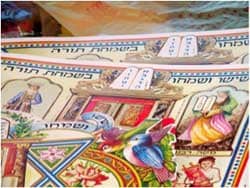 The parsha (weekly Torah portion) that is read on the holiday Simchat Torah is Vezot HaBracha, which is the very last portion in the book of Devarim (Deuteronomy). Vezot HaBracha means "and this is the blessing" and they are the first words of the portion. Be sure to check out the video at the end of this article; it ties our Torah adventure up into a nice little bow.

I know this might not come as a surprise to my loyal readers since I have been previewing this for the past few parshot but . . . SPOILER ALERT . . . this is the parsha where Moses dies. However, let's start at the beginning.

This is the Torah portion that we read, not on Shabbat, but on Simchat Torah. This is the holiday that comes at the end of the holiday, Sukkot. We are literally celebrating the end/beginning of the Torah. What do I mean the end/beginning? We all know that an end is never really an end; it is just a new beginning and so is true with the Torah. We never finish studying it, but what do we do when we come to the physical end of the five books Moses gave us? Well, we have a party and dance and sing and rejoice with the Torah and then a couple days later we start again, on shabbis, with the first portion in the Torah -- Bereshit. On the technical side, we read all of Vezot HaBracha on Simchat Torah and then one Aliyah, one section of verses, of Bereshit. Then we read the rest of Bereshit on the next shabbis, call Shabbat Bereshit (for obvious reasons).

So, what is Vezot HaBracha about? How do we tie these adventure stories and moralistic tales into a nice, neat bow? Moses, who (like us) has known that he will be dying very soon, calls the Israelites before him to give each of them a blessing. He blesses each tribe. Some blessings are small and obscure and some are large and clear. Within the first section, the blessings are handed out in a special order and then from there, it is in birth order. Here is how the blessings breakdown:

Reuven -- He is the oldest. His blessing is that he will survive but his tribe will be small.

Judah -- Judah is blessed next because of the role he plays in the future of the Jewish people. Moses' blessing to him is that G-d will help him manage his foes.

Levi -- The Levite tribe is very special to G-d. Why? Because G-d made this the tribe whose birthright is to be high priests and holy helpers. Why was this? Because the Levites always sided with G-d, even in the situations when the other men of Israel didn't. Moses' blessing to them is that they will teach the laws to others.

Benjamin -- Benjamin was a favorite child, even to G-d. That is why he is next. The blessing for them was that they would always be beloved and protected by G-d. It also says something interesting -- that Benjamin will rest securely between G-d's shoulders. What does this mean? It has been explained that Benjamin's portion of Israel was Jerusalem, which included the Temple Mount. The Temple Mount rises up like a man's head from Jerusalem, therefore Benjamin rests like the head on G-d's shoulders.

Joseph -- Last of our select group, Joseph was blessed with morning dew and bright sun, good crops, and an abundance of produce along with healthy and fruitful animals.

Zevulon and Issachar -- Why are these two put together? Well, they had a great partnership. Zevulon was the businessman. He put food on the table and clothes on their back. Issachar was the scholar. He studied all day. In the end, they divided it all. Issachar took half of what Zevulon earned to support himself and his family while Zevulon took half of the merits Issachar earned for his diligent study. What was their blessing? It was that they would be by the sea and be very successful in all that they did. What does it mean to be by the sea? Well, Zevulon was a merchant and most likely he had ships. Their partnership would be successful. But if Issachar is the scholar, why is Zevulon mentioned first? It is because without his support, putting food on the table, Issachar could not study.

Gad -- Gad is blessed with incredible strength as a warrior and a judge.

Dan -- Dan's blessing is odd. It discusses a lion's whelp. What does that mean? It means that Dan will be very strong. He will be the Marines of the Israelites to defend and protect.

Naphtali -- Naphtali's tribe will find much favor with G-d and find success in lands in the West and South.

Asher -- Asher will also be very blessed and be a favorite of his brother. It says they will "dip their feet in oil." Why? Their land was up north with olive trees and they supplied the olive oil to the Temple.