Sacha isn’t the only one of his generation of Baron Cohens to challenge American audiences with negative portrayals of their countrymen. Ash, Vivian’s youngest son, who recalls being chased by Neo-Nazis in London as a kid, earned a degree in experimental psychology from Essex University before heading to Hollywood in the 1980s. He enrolled in film school and at age 21 persuaded Richard Harris to take a day off from filming Clint Eastwood’s Unforgiven to star in his first student film.

Although he was expelled from film school (he says for shooting a film about a dominatrix in 16 mm film instead of the Super 8 mm film that was assigned), he managed to get a footing in the business. His first feature, Bang, about a woman impersonating a Los Angeles police officer, was named one of the Top 10 films of 1997 by the Los Angeles Times and critic Roger Ebert. Oliver Stone was so impressed that he wrote a letter of support to help Ash secure a work visa. As Ash told Esquire, “After he saw Bang, Oliver says, ‘We’ve got to get you legal.’”

Other movies in the works are Radio Active starring Mickey Rourke and The Blind Bastard Club with Lenny Kravitz. Dark humor, social observation, and themes of violence pervade Ash’s films. In American culture, he says, “there seems to be an unfulfilled craving and love for violence.” His 2002 documentary, Little Warriors, about 11-year-old children living with AIDS, won an award from the Discovery Channel, and he has recently completed a sequel, Little Warriors: Big Fists, about the same group at age 17.

Ash says he and his cousin Sacha are supportive of one another, though they’ve never worked together. “The only thing I can say is that we’ve both really watched out for each other,” he told Esquire. “We’ve both had situations where it’s been good to have the other guy there to call up. For years, we were each other’s only family here.”

Their films are very different. Much as Sacha has exposed shortcomings like racism and homophobia, Ash has focused on American gun violence -- much rarer in Britain, he points out. In America, he says, “I feel a bit of an outsider; that’s the nature of an artist; looking . . . from the outside.”

Growing up as a Jew in Britain has given Simon Baron-Cohen a sense of what it means to be an outsider. “Being Jewish in North America you can be much more open with it; it’s more of a comfortable thing,” he tells me in his office at Trinity College, Cambridge. “I think here we haven’t gotten quite to that same point.”

Simon, Ash’s older brother, is a professor of developmental psychopathology at Cambridge University, and directs its Autism Research Centre. (Unlike the other members of the family, his surname has a hyphen, thanks to a typographical error in his first professional article that he never corrected.) He has a gentle, almost diffident, manner of speaking, surprising in an academic who has waded into the provocative ground of sex differences, enraging some feminists with his theory that autism and Asperger’s Syndrome are extreme forms of what he calls the “male brain.” His 2003 book, The Essential Difference, cites studies finding that females tend to do better than males on tests of empathy, while males tend to do better on problems involving tasks such as reading maps or doing math.

He attributes his interest in people who lack social skills partly to his sister, Susannah. Despite being born with brain damage that impaired her intellectual capacity, Susannah was innately social, Simon noticed. That he would devote his life to exploring this subject stems from being part of a religious minority. “Being a member of a minority must make you see the world differently.”

Cambridge did not allow Jews to receive degrees until 1856, and it was not until 1871 that barriers to Jews holding paid teaching positions were removed. “I know academia is just one tiny slice of Britain but it gives a window into where Jews have fit in to the culture -- or haven’t,” says Simon.

Outside the window of Simon’s office is a chapel in an ancient courtyard. Every college at Cambridge has a chapel. Simon, who identifies himself as an atheist, is now helping to raise money to build the first Reform synagogue in Cambridge for Beth Shalom, the twenty-year-old lay-led community. “Just having a little point somewhere in the landscape that shows not everyone fits into the same traditions or has the same history is quite important.”

Simon is married to Bridget Lindley, a lawyer and deputy chief executive for Family Rights Group, a London-based charity that works on finding alternatives to foster care for children from troubled families. Simon and Lindley, a Christian, have three children. The two oldest go by the last name of Baron and dream of making it in the entertainment business. 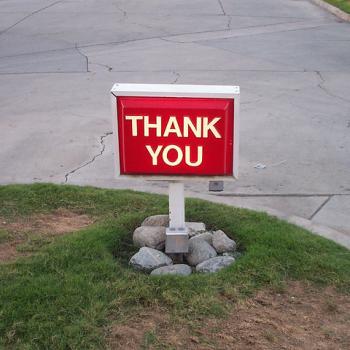 Practices From the Inside Out: Contemplative Thanksgiving
Greg Richardson
3

'The Waltons' Homecoming': The CW's CEO on the Net's Faith-Full Reboot of a...
Kate O'Hare
4

Christian Mommy: Our Obesity Problem Could Be Solved if Women Stopped Working
Beth Stoneburner
About
Get Patheos Newsletters
Get the latest from Patheos by signing up for our newsletters. Try our 3 most popular, or select from our huge collection of unique and thought-provoking newsletters.
From time to time you will also receive Special Offers from our partners that help us make this content free for you. You can opt out of these offers at any time.
see our full list of newsletters