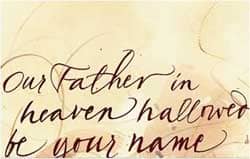 In internationally-renowned Bible scholar John Dominic Crossan's new book, The Greatest Prayer: Rediscovering the Revolutionary Message of The Lord's Prayer, he invites readers through eight thought-provoking chapters exploring one phrase in the world-famous prayer after another. We welcomed Crossan to talk about his research into The Lord's Prayer and the arguments he lays out in his new book.

First, let's tackle head on the opening words of the world's most popular prayer: "Our Father." You argue that such an opening holds a vital meaning and doesn't necessarily depend on the patriarchal bias of the ancient world in which it first was voiced. And, you also warn that we shouldn't tinker too much with that opening. It's not enough to start the prayer with a neutral, "O God." You argue that using the term "Father," or "Parent" perhaps, is very important. Why?

The world's greatest prayer does start off with this patriarchal term, "Father," and we have to admit that, yes, the Bible has a basic preference for terms like that. And, of course, it was originally a patriarchal reference. It comes out of a patriarchal tradition. So, that's no big surprise.

But let's look at the meaning within that wording; we find that it's very important to what comes after it in the prayer. What we're really doing is we're starting the prayer by calling upon the Great Householder. A householder could be either a man or a woman but of course biblical authors had all of these assumptions about men being the householders.

Today, we're really talking about God as the Householder of the Whole. Or, another way to put it is: God is the Householder of the World. That's what we're saying when we begin that way. What really interests the writers of the Bible is: What should a good household be? What should a good householder do? Re-read the Bible and you'll find this concern runs throughout: Everybody agrees that it's a bad household if half the kids are starving and half are overfed. And that's just one example.

Yes, absolutely. The heart of my whole argument is that we're not talking about how to get ourselves into heaven in this prayer. And, we're not talking about punishment in this prayer. This prayer isn't calling the world an awful place and focusing all our energies on just escaping this world and getting into heaven. No, this prayer is saying: If you could ever get up to heaven and see how God runs that household, you'd realize that God runs a very good, fair household. And, if right here on earth, our overall household is not doing too well, then we're clearly not hallowing God.

Think about the increasing inequalities not only in our own country over the last twenty-five years, but the vast inequalities between the world's poor and the wealthy in many of the world's rich countries. There's been an exponential increase in those inequalities in recent years. Compared with the biblical ideal of God's household, that's a horror! What's happening in our world is absolutely horrifying, compared with what the Bible is teaching us about God's household.

If readers buy your book and use it in a small group, you're going to get some spirited discussion with these issues. And the conversation is really going to heat up when readers get to your section on "forgive us our debts." That's the section of the prayer in which some people pray "trespasses"; some people pray "sins." Your book has a whole lot to say about this portion of the prayer. Give readers just a little summary of some of the issues they'll encounter.

Well, it's very interesting that when you go through the text of the "Our Father," you discover that toward the end you begin to get these various translations. "Daily bread" is still the same everywhere, but there are various translations of  "debt." The original term in the original prayer almost absolutely was "debt." But we've also inherited this word "trespasses" and Luke changes it to "sins," although he still says "as we forgive our debtors," so he retains a bit of the original.