Religion Among the Savages? 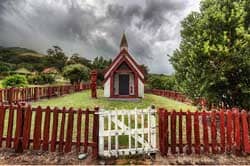 A new study by the Pew Forum suggests that many Americans are strangely ignorant of what they claim matters deeply to them:

Nearly six-in-ten U.S. adults say that religion is "very important" in their lives, and roughly four-in-ten say they attend worship services at least once a week. But the U.S. Religious Knowledge Survey shows that large numbers of Americans are uninformed about the tenets, practices, history and leading figures of major faith traditions -- including their own.

But is this as paradoxical or damning as the authors of the study would have us believe?

Imagine an anthropologist concluding that his research subjects do not know very much about their own culture, because they cannot answer many of the anthropologist's questions about it. That, other things being equal, such a conclusion would be unwarranted is suggested by at least two considerations. One is that the kinds of things that an anthropologist, approaching a "culture" as an "outsider," might consider interesting or important about it might not be the sorts of things with which practitioners would be immediately concerned.

A second worry is the following: that our fictional anthropologist has defined "the culture" independently of what people "in it" actually believe about themselves, and then rendered a negative verdict on their "cultural knowledge." But if a certain fact is of little concern to our imagined research subjects, however salient it might seem from the anthropologist's perspective, why insist that it is central to "their culture" or interpret their ignorance of it as a shortcoming? Might it not instead suggest that our anthropologist has misidentified or idealized the actual "culture" to which his informants belong?

Insofar as the Pew survey purports to measure what believers ought to know about their "own traditions," it seems to betray a subtle disdain for lived religion -- religion as it is practiced by ordinary people -- and a preference for what elites take to be important. To whom does it matter that 45 percent of U.S. Catholics "do not know that their church teaches that the bread and wine used in Communion do not merely symbolize but actually become the body and blood of Christ"? Bishops, presumably.

No doubt the results of the Pew survey will be seized upon as evidence of widespread "religious illiteracy," and especially of Americans' ignorance of "world religions" (a category the authors of the study occasionally contrast with Christianity). But what would here constitute a respectable level of knowledge? Without a benchmark against which to measure success and failure -- is the atheists' high score of 65 percent still a "D"? -- it is hard to tell whether the results of the survey are cause for alarm or celebration. It would, for example, be interesting to know how Americans' knowledge about such things compares with that of people in other countries, and whether it is increasing or declining over time. In any case, when Americans say (sincerely) that religion is very important in their lives, presumably they usually mean that their religion, as they understand it, is very important, not that they necessarily know a lot about "the tenets, practices, history and leading figures of major faith traditions," as these would be identified by social scientists.

The term the survey uses in reference to what it purports to measure is "religious knowledge," but what exactly is that? It is plain from the questions asked that what the survey is actually attempting to assay is knowledge about religion -- i.e., of certain claims whose status as "facts" is not itself a matter of disagreement among the faiths. The survey does not, for example, ask respondents how eternal life can be attained, or to identify the Last Prophet. But if what we are really talking about is not the "emic" knowledge of the skilled practitioner, but rather the "etic" knowledge of the religious studies major, then why act surprised when it turns out that respondents with more formal academic training know more of the right answers? The same would no doubt be true of any number of other specialized topics -- economics, computer science, animal husbandry.

The apparent assumption behind calling what religion scholars know "religious knowledge" is that it concerns a particular subject matter -- namely, religion. But that "religion" names a discrete domain of human experience is an assumption that religion scholars themselves have helped to put in question. Since nothing comes labeled as "religion," our inclination to categorize certain things and people in this way should arouse critical interest. If it seems reasonable to expect Americans to identify Maimonides, Muhammad, and Martin Luther as "religious" leaders, and then properly to match each with a different "world religion," that is because we have been taught to think in ways that would have puzzled these figures themselves.

(It also is worth noting what is not asked about in the survey: apparently ignorance is acceptable in the case of, say, Confucianism or Candomblé.)

None of this should be taken as an apology for ignorance. But what the survey tells us about lived religion in the United States is, I submit, the real story here.

Richard Amesbury is Associate Professor of Ethics at the Claremont School of Theology. He writes about religion in American public life and can be contacted at ramesbury@cst.edu.