There are a few things that we can see with reasonable clarity about the future of religion in America.

As far as non-Catholic Christianity is concerned, what University of Chicago religious historian Martin Marty called the "two-party system" of American Protestantism is coming to an end. No longer do Mainliners and Evangelicals vie on more or less equal terms. The Evangelicals have won. Mainliners will not disappear, of course. But they are rapidly shrinking toward one-tenth of the population, and though they still retain disproportionate influence in society, there is very little left of the once hegemonic Protestant Establishment.

Meanwhile, Evangelicals have made their presence powerfully felt -- in politics, in the military, in popular culture. Their growth, however, is not in the traditional places: the Southern Baptist Convention and the Assemblies of God and the other old-time denominations. It's in the non-denominational sector, the land of the megachurch, where you identify yourself as just "Christian," where a generalized, pentecostalized worship style is the order of the day, and where feeling matters more than doctrine. For doctrinaire Evangelicals, this will turn out to be something of a Pyrrhic victory.

Perhaps the most striking development on the recent religious scene has been the doubling of the proportion of Americans who say they have no religion -- to 15 or 16 percent of the population -- over the past two decades. We're not talking here of people who just don't go to church or some other house of worship, or who happen not to affiliate with one. These are the folks who, when you ask them, "What is your religion, if any?" say, "None." Call them Nones. Today they outnumber all the Methodists, Episcopalians, Presbyterians, and other Mainliners put together.

The rise of the Nones has something to do with a decrease in religious belief. Self-described atheists and agnostics are on the rise, and they are more assertive than they've ever been. But by far the largest proportion of Nones claims to believe in God, and many engage in spiritual practices. What they don't do is identify with a religion. Why not?

What seems to be happening is a shift in the way Americans think of religious identification itself. Where once we considered religious identity as something given to us in childhood and retained unless and until we change it, now we are more inclined to see it as a description of what we do and believe in the present. Formerly, a non-churchgoing adult who was sent by his parents to a Presbyterian Sunday School would be likely to identify as a Presbyterian. Now he's more likely to answer, "None."

As time goes on, this shift will be easier on those religious traditions that emphasize personal choice as a marker of religious identity. That's good news for the Evangelicals, who have always stressed the importance of making a conscious decision for Jesus. But where all Evangelicals are, by definition, Christians by choice, only converts to Judaism are called Jews by choice. In America, Judaism is, par excellence, the religion of ascribed identity. Since 1990, the number of Americans answering "Jewish" to the question of religious identity has dropped by nearly half a million, to under 2.7 million, while the proportion of Jews in the population has declined by a third, to 1.2 percent. Today, Judaism is the canary in the mine.

The future of religion in America is religion by choice.

Mark Silk is the Director of the Leonard Greenberg Center for the Study of Religion in Public Life and Professor of Religion in Public Life at Trinity College. He is the founding editor of Religion in the News, a magazine published by the Center that examines how the news media handle religious subject matter. In June 2005, he was also named director of the Trinity College Program on Public Values, comprising both the Greenberg Center and a new Institute for the Study of Secularism in Society and Culture. He is the author of numerous books and articles, including One Nation, Divisible: How Regional Religious Differences Shape American Politics, Unsecular Media: Making News of Religion in America, and Spiritual Politics: Religion and America Since World War II. Visit his blog on religion and American political culture: Spiritual Politics. 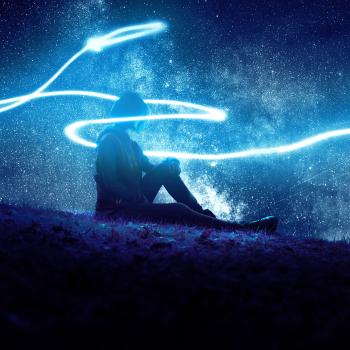 Premonitions: Messages from God or Something Stranger?
Tom Rapsas
About
Get Patheos Newsletters
Get the latest from Patheos by signing up for our newsletters. Try our 3 most popular, or select from our huge collection of unique and thought-provoking newsletters.
From time to time you will also receive Special Offers from our partners that help us make this content free for you. You can opt out of these offers at any time.
see our full list of newsletters