Drawing on recently published work, this short article introduces a series of factors that are currently shaping the religious life of Europe. These factors not only change and adapt over time, they push and pull in different directions. (Note that these comments have particular relevance to western Europe. Those parts of Europe that were under Communist domination until 1989 have a rather different trajectory. They are less influenced by the relatively recent arrival of Islam and more by long-standing religious minorities -- a presence very often brought about by historic border changes.)

These six factors, then, that will shape the future of European religion:

1)   The role of the historic churches in forming European culture. This is easily illustrated in the sense that the Christian tradition has had an irreversible effect on time (calendars, seasons, festivals, holidays, weeks, and weekends) and space (the parish system and the dominance of Christian buildings) in this part of the world.

2)   An awareness that the historic churches still have a place at particular moments in the lives of modern Europeans, though they are no longer able to discipline the beliefs and behaviour of the great majority of the population. Despite their relative secularity, Europeans are likely to return to their churches at moments of celebration or grief (whether individual or collective).

3)   An observable change in the churchgoing constituencies of the continent, which operate increasingly on a model of choice, rather than a model of obligation or duty. As a result, membership of the historic churches is changing in nature; increasingly it is chosen rather than inherited, though more so in some places than in others.

4)   The arrival into Europe of groups of people from many different parts of the world. This is primarily an economic movement, but the implications for the religious life of the continent are immense. The growing presence of Christians from the global South alongside significant other faith communities has altered the religious profile of Europe. Quite apart from this, some of these communities are -- simply by their presence -- challenging some deeply held European assumptions, notably the notion that religion should be considered a private matter.

5)   Rather different are the sometimes vehement reactions of Europe's secular elites to this shift, i.e. to the increasing significance of religion in public as well as private life. Such elites did not anticipate a change of this nature, but see it as their duty to question what is happening, sometimes aggressively, sometimes less so.

6)   A gradual, but growing realization that the patterns of religious life in modern Europe should be considered an "exceptional case" -- they are not a global prototype. It short, Europeans are beginning to realize that Europe is secular not because it is modern, but because it is European. It is equally true that some Europeans welcome this insight; others are disconcerted by it.

It is important that we consider these factors alongside one another in order to get a rounded picture of what is happening. The future is very uncertain. Indeed the current state of religion in Europe is paradoxical. On the one hand, religion has re-entered the public square and demands a response. On the other, a largely unchurched population has difficulty dealing with these issues in the sense that increasingly secular Europeans are rapidly losing the concepts, knowledge, and vocabulary that are necessary to talk about religion. Speaking for my own country at least, this is one reason for the lamentable standard of public debate in this field.

How can we manage this situation more constructively?  That is the challenge facing European societies today.

This article draws on Davie's previously published work, particularly "Is Europe an exceptional case?" in The Hedgehog Review, 8, 2006: 23-34 (a special issue entitled ‘After Secularization'); and "Religion in Europe in the 21st century:  The factors to take into account," in Archives européennes de sociologie/ European Journal of Sociology/ Europaeisches Archiv für Soziologie, XLVII/2, 2006: 271-96.

Lights out tonight, trouble in the heartland
Fred Clark
3 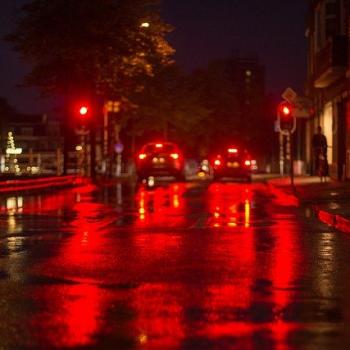 The Name I Call Myself
Mary Pezzulo
4

Marjorie Taylor Greene Attacks New CDC Guidelines
Andrew Hall
Get Patheos Newsletters
Get the latest from Patheos by signing up for our newsletters. Try our 3 most popular, or select from our huge collection of unique and thought-provoking newsletters.
From time to time you will also receive Special Offers from our partners that help us make this content free for you. You can opt out of these offers at any time.
see our full list of newsletters
Editor's picks See all columnists