Remembering 9/11: Have We Made Progress? 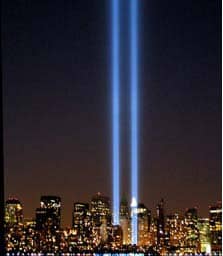 Remembering 9/11 is perversely similar to remembering the birth of your child. Although most Americans watched the events unfold on television from hundreds or thousands of miles away, those moments when the towers collapsed commanded all of our attention and absorbed all of our sensory powers. The memories are vivid, filled with horror and righteous rage, and so very present to us that it seems as though 9/11 were just yesterday. And yet, on the other hand, America in the intervening years has endured so much that it scarcely seems possible that only nine years have passed.

Nine years ago, few Americans knew or cared where Afghanistan was, and the Iraqi people cowered under the cleaver of the Butcher of Baghdad. Most of the buildings in Haiti were still standing, and "Gitmo" and "Katrina" and "Deepwater Horizon" had not yet entered the American popular lexicon. George Bush was an affable fellow who appeared to have a mild speech impediment and who still believed his Presidency would be about education reform. Dick Cheney had never shot anyone (that we know about); Al Gore had just lost an election, yet he would win consolation prizes from embittered liberals worldwide, including a Grammy, an Emmy, an Oscar, and even a Nobel Peace Prize. John Edwards, Mark Sanford, Mark Souter, Ted Haggard, and Tiger Woods were all family men, and Senator Larry "Wide Stance" Craig had not yet been caught playing footsie in an airport bathroom. George Soros and Moveon.org had not yet "bought" the Democratic Party, and the Republican Party claimed they were poised for permanent majority status -- before the Democrats claimed the same, for a while. Sarah Palin was a mayor of a tiny Alaskan town enjoying her view of Russia, and Barack Obama was an undistinguished state senator in Illinois who could hardly have imagined that he would one day inspire a stretch of collective temporary insanity that would net seventy million votes for a Presidential candidate with virtually no germane experience.

Nine years ago, the dot-com bubble had just burst, the housing bubble was still inflating, and Enron and Lehman Brothers were solid bets. The "big three" anchors still sat in their chairs every evening, and the new media was just beginning its rise. Mark Zuckerberg had not yet stolen the idea for Facebook, Markos Moulitsas had not begun to blog, and Arianna Huffington had not launched the website/vanity project that would explode into one of the largest websites in the world. The Tea Party had not yet begun to brew, and the cultural elites still generally managed to conceal their disdain for the citizens of Jesusland. The celluloid incarnations of Frodo and Harry Potter had not yet left the burrow underneath the staircase or the closet underneath the hill (or maybe I'm mixing them up). And the world had not yet been infected by the pop-culture viruses known as Paris Hilton, Lindsay Lohan, Miley Cyrus, and Justin Bieber.

Nine years before 9/11, Francis Fukuyama published a book that heralded the end of history. Nine years after 9/11, it seems as though history has accelerated.

Yet this is not history as we have known it before. It is a dizzying procession of the pivotal and the pointless -- an admixture of what is important with what should, by all rights, be irrelevant. History is crashing on, for sin and evil are not defeated, and never shall be for as long as history is a history of humanity. Yet history now stands the absolute and the absurd side by side, so that David Petraeus and Levi Johnston are just two more celebrity faces that flash by on the television screen.

Witness the utter ridiculousness of the Terry Jones tragicomedy. Whether or not Jones lights the match, the story illuminates the strangeness of the present historical moment. We stand before the ninth anniversary of a day in which three thousand Americans were slain by a hateful and bloodthirsty terrorist organization -- an organization that still exists and still seeks our destruction, and that has inspired countless attacks around the world, including several successful small-scale attacks within the United States in recent years. Are we discussing the three thousand Americans who lost their lives? Are we discussing the American soldiers, and soldiers from other nations, who have responded to the threat? No. We're discussing a bizarre Floridian pastor with a handlebar mustache and delusions of grandeur who proposed, to the fifty people who ostensibly attend his church (locals report a number closer to twenty), that they should burn some Korans as an act of defiance against Muslim encroachments on western values.