Terry Jones Is Not the Enemy 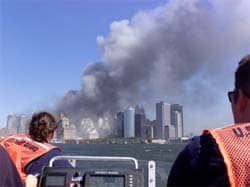 I've been defending free speech and religious liberty for virtually my entire legal career. Nineteen years ago I volunteered -- as a law student -- on my first religious liberty case, and I haven't stopped working since. I can safely say that I've seen it all. The price of America's robust commitment to religious liberty is that we have more than our share of fringe characters -- borderline sane individuals with small followings preaching fire and brimstone (and sometimes running eBay businesses) from storefront churches across the land. Rarely do these fringe figures attract attention -- though they try desperately -- and even less frequently do American presidents, much less Angelina Jolie, hang on their every word.

But Terry Jones has found the formula, one that Fred Phelps, the soldiers' funeral protestor, no doubt wishes he'd discovered years ago:  Tell the media you plan to burn a Qur'an.

Our media never met a tabloid freak show it didn't love, and one that involves an extremist Christian is catnip for reporters looking for evidence of "Islamophobia." And so now our nation's remembrance of 9/11 has become Terry Jones week, and a burning book changes our focus from where it should be: the burning people and burning buildings in New York, Washington, and Pennsylvania.

Terry Jones is not our enemy. He's a seemingly peaceful, eccentric, and positively cranky man who's doing a stupid and senseless thing. I hope he ultimately chooses not to burn the Qur'an. But if he does, he does nothing more than place himself in a long line of offensive American speakers -- of all faiths. By now we are all used to burning flags, to desecrated crucifixes, and to the ever-escalating efforts of fringe figures to shock their way onto the front pages.

The enemy reacts to our free speech with bombs. The enemy despises our liberty not for its permissiveness toward Qur'an burners but because it exists and because it is utterly inconsistent with Sharia law. I served a year in Iraq with the 2d Squadron, 3d Armored Cavalry Regiment. During that year, Terry Jones was toiling away at his church/eBay business in total obscurity, yet al-Qaeda still seethed with enough hate to launch a female suicide bombing campaign and to commit atrocities that the American public can scarcely comprehend.

Terry Jones wasn't burning Qur'ans on September 10, 2001. He wasn't burning Qur'ans when the "Blind Sheik" plotted the first World Trade Center bombing or when Pan Am Flight 103 blew up over Lockerbie, Scotland. Our enemies don't need Terry Jones to hate us or to recruit thousands of suicide bombers and tens of thousands of jihadists. So on this week of remembrance, let's take the cameras off the crank from Florida and put them instead on the yawning gap in the New York skyline and on the soldiers who fight to make sure the enemy can never strike again.

The media has made Terry Jones. The media can unmake him. And they should -- after all, there's a real enemy out there to challenge, to shame, and to defeat.

David French is a senior counsel for a Christian religious liberties organization, a captain in the United States Army Reserve, and a veteran of Operation Iraqi Freedom.