Why I Wrote This Book 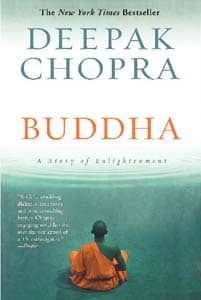 Buddha is the most important man who ever achieved enlightenment. Although we see him as a calm, benevolent ﬁgure, the actual life story of Buddha was tumultuous and dramatic. I wanted to bring this mysterious ﬁgure, who died 2,500 years ago, into the present in all his psychological complexity. What better way to grip the reader than to tell Buddha's story from the inside. No other human being has lived such a life.

The tale unfolds in three parts:
1. Buddha began life as Prince Siddhartha, who was sheltered from the world and raised by his father to become a warrior king. The great fear surrounding Siddhartha was that he would discover that he had a second destiny, foretold by the court astrologers. If he renounced being king, he would become the greatest spiritual leader in the world.

2. After twenty years of inner struggle, Siddhartha threw over everything-wife, child, privilege, a throne-to become a wandering monk known as Gautama. Convinced that he could achieve enlightenment only by the most extreme ascetic practices, Gautama starved himself to the verge of dying. This section of his life confronted Buddha with temptations and a close encounter with Mara, king of the demons.

3. Just days before what appeared to be the end of his life, Gautama was abandoned and alone. Suddenly he saw the error of trying to defeat his body and mind by force. Sitting under a huge ﬁg tree, he achieved enlightenment in one night-a feat unmatched in history. By sunrise he had become Buddha, the awakened one. He was thirty-ﬁve years old and ready to cause an earthquake in the spiritual life of India. The aftershocks completely altered the course of civilization throughout Asia.

My novel carries the reader from Buddha's birth to the time of enlightenment. No other book, to my knowledge, shows what it must have felt like to experience such depths of despair and heights of ecstasy, to renounce love in favor of spiritual perfection, to contain in one body enough wisdom to change the world. To me, that's the essence of Buddha, and I hope an avid readership will greet his story with the same wonder and hunger for spiritual inspiration.