According to Plan: The Habit of Witness

This is the first entry in Patheos' "The Habit of Witness" series, featuring essays written by consecrated Catholic women and men sharing their encounters and experiences while dressed in the habit of their order or office. 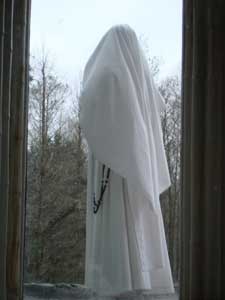 On a home-visit in 2004, I found myself driving my Dad's 1966 Mustang south on the 101 at eleven o'clock at night. I was on the last leg of the six-and-a-half hour drive back from Sacramento, and, looking down at the gas meter, I decided I'd better stop soon. I saw a gas station ahead, and pulled off the freeway, and when I saw how deserted the station was, I could have kicked myself for not stopping earlier.

I pulled into the station determined to buy only as much gas I needed for the rest of the trip and get back on the road as quickly as possible. It all went according to plan; I pumped the gas and then dived back into the driver's seat, turned the key, and the engine roared into life. I put the car in drive, and then it happened.

There, in front of my car stood a young man in his early 20s. My first thought was to maybe put the car in reverse before either he or I became a casualty. But then I looked at him again, and my unrest was subdued. Even in the not-so-bright lights of the small gas station, I could see that his cheeks were streaked with tears. His hands were outstretched toward me, partially imploring, partially bracing for impact.

He came to my side of the car, and a cautiously cracked my window a bit.

I wasn't prepared for that question, but quickly realized that he was asking because he could see my veil. "Yes, I am," I said.  "Can I help you?"

Moved to get out of my car, I stood beside him as he shared his story. His girlfriend had been in a car accident and she wasn't expected to live; his grief was compounded by the fact that the girl's father didn't approve of the relationship and was refusing this young man the opportunity to say goodbye.

My plan had been a quick fill up and getaway. God's plan had me at a gas station in a strange place at eleven o'clock at night, consoling a young man in tears.

Feeling helpless, I asked the young man his concerns for his girlfriend, and we simply talked -- about heaven and hell, love and trust. I went through the articles of faith with him ("Do you believe in one God, Father Almighty, creator of heaven and earth?") and he seemed surprised to realize just how much faith he had. We talked about God's mercy and hope, and then moved to the more serious matter:  I asked him, "Are you willing, if God is calling your girlfriend home, to let her go?"

He was shaking like a leaf. It was a cool evening, but not cold; he was trembling from something inside, not out. Between fresh tears he said, "I don't want to lose her, but I want to let God do what he wants."

I suggested that we pray. And there we were, praying for his girlfriend, for healing, and also praying that God's will be done. I don't recall how long we prayed, maybe seven or eight minutes, but by the time we finished, I could see a physical change in the young man. His shoulders were more resolute; he was no longer shaking, and his eyes were clear.

Making my way back to the highway, I knew that God was with him in his present crisis, and that yes, he would be okay.

Sr. Lisa M. Doty is a Canossian sister who blogs at Nunspeak. This is adapted from her essay, "A Moment of Crisis," which appeared at her blog on October 5, 2010.