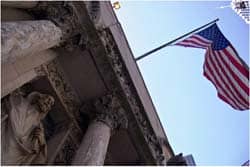 Recently it has been alleged that politically conservative evangelicals have conflated their political agenda with their faith and their preferred political party with the church of Christ. The participants at Tea Party events, and the recent "Restoring Honor" rally assembled before the Lincoln Memorial by Glenn Beck and others such as David Barton, have been disproportionately evangelical. Are they guilty of confusing love of God and love of country, or the conservative ideal with the kingdom of God?

These are matters of the utmost importance, both for the faith of believers and for their witness to the world. Thus the Evangelical Portal at Patheos, in the interest of a clearer and more constructive conversation, has invited evangelical experts and commentators from across the political spectrum to offer their thoughts on three specific issues:

1)   When does patriotism pass over into idolatry? How do we define America-worship? What is the difference between loving, honoring, and worshiping America?

2)   What are the healthy and unhealthy ways of relating politics and religion?

3)   And what is the evidence that politically conservative evangelicals have become guilty of America-worship and wrongly relating their politics and their faith?

Interviews and opinion pieces will be published as articles, and thus far (this page will be updated daily until the series is done) we have posted:

We will also be posting shorter responses from bloggers at Cross and Culture:

Many thanks to those who have already contributed, and to those who will contribute in the coming week. Join the conversation and let us know what you think.