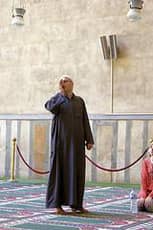 At dusk comes the sound of the call to prayer. It starts as a low keening, a man’s thin, plaintive cries. It is a winter night and there is no snow but the sky wears the heavy look of winter and the branches of the trees are stark against the clouds. Everything seems gray or black -- the sky and the trees and the long coats of the women and the shorter coats of the men, talking in groups or walking in pairs.

The prayer song lengthens and deepens until the sky reverberates with it. Notes thicken in the trees. Whenever I hear the call to prayer, I think of the first time I heard it, a winter night on my first visit to Iran: the carrying notes and the heavy sky and that mysterious quality to a cold evening without snow -- the hint of it in the air and the trees and the frozen ground, but elusive, hidden, not yet revealed.

I think of the women’s faces tucked behind their scarves, the shadowy formlessness to their cloaked bodies. I think of the domed mosques like Faberge eggs, the way they seem to withdraw into themselves (unlike the piercing forthrightness of cathedral spires), but reveal inside breath-taking displays of mirror and tile along the ceilings and walls, flashing combinations of color and light like a small bit of Paradise. And I think of the way my father-in-law prays, alone in his room, head bowed and arms by his sides.

Allaho akbar, God is great, we call your name to the skies.

While he prays finches rise and scatter, and as he inhales they come to rest on the balustrade. He comes to his knees and brings his forehead to the prayer rug and the mohr that resides there, the flat hexagonal stone representing the dirt upon which Shiites past had died. Rise and fall. In and out. These are the rhythms of the oceans and the seasons, migrations and couplings, all the patterns of life. The muffled Arabic chant seems to mimic the sound of breathing itself, as if to pray is to become aware of one’s breath, one’s self, through intense dedication to the moment.

What I like most about the way my father-in-law prays is its understated quality. This is a man who has no use for mullahs -- to him they used to be something of a joke (like the often told Mullah Nasradin stories chronicling the antics of a bumbling holy man), men who felt entitled to free food and drink, and all the extras of life, because they wore turbans on their head. Then the joke turned sour. They took the law and recast it in their own image. My father-in-law lost his job and mourned his successor’s execution and watched the streets of his neighborhood wither from neglect.

He listens to their rhetoric and hides his satellite dish and homegrown wine in the bowels of his house, in the garage deep under the earth. And he hides his contempt, but barely, at those who would attempt to run a country with no knowledge of politics or how to keep traffic flowing or keep up the economy of a country now under sanctions and short of cash; at those who would force the public into the private -- how one may dress and behave, what one may drink or discuss -- and the private into the public, declaring open season on individual convictions.

And still my father-in-law prays, alone in his room, without calling attention to himself or his own private devotion; the small dignity of that ritual rising and falling, the chant like the rush of breath one hears as wind is expelled through trees and taken up again elsewhere.

He prays and the finches gather outside his window. Always when I hear that low keening, the nightly call to prayer, I think of my father-in-law with his back to me, his elusive and enduring faith.

This article was first published at Killing the Buddha, a Patheos Partner, and is reprinted with permission.

Sahar Kaghazi is the pseudonym of a writer living in Los Angeles, CA.