Can This Nation Be Saved? 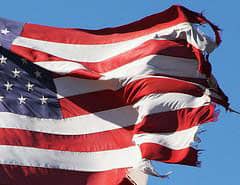 A military intelligence officer’s job often requires him or her to try to see around the next corner: to think beyond the current situation and interpret signs and portents about where events are headed. This frequently puts the intelligence officer in the uncomfortable position of prophet; he or she goes around saying things that others are not yet prepared to hear. The intelligence officer moves in a world in which certain aspects of the future seem obvious to him, but that mindset can look like foolishness or even lunacy to those who are concentrating on today’s problems.

What the intelligence officer learns is how often his predictions and analyses are dismissed by skeptics one day -- and then repeated back to him by the same skeptics as if they were received wisdom a week later. It takes people time to process new thoughts. They aren’t always ready to accept or act on them on first hearing. It’s a very common human pattern for people to reflexively reject new thoughts, sometimes with impatience or even anger. But any experienced intelligence officer can tell you that initial rejection doesn’t mean the new thoughts have no hope of taking hold.

In fact, if they have inherent strength and value, they will. In intelligence work, that means the thoughts -- ideas, theories, conceptual systems -- must explain and predict observable events. And although the qualities of strength and value may be defined differently in different contexts, the same dynamic is present in all intellectual pursuits. Unfamiliar ideas must pass an endurance test: they are first resisted, then mulled over, then provisionally accepted, and finally added to each person’s intellectual foundation as if they had always been there.

The intellectual realm I am thinking of today, just over a week before the November 2 election, is the moral life of the American people. Many conservatives, including conservative Christians, have a somewhat pessimistic view of our prospects for moral and spiritual regeneration. The political trend in this campaign season is strongly against the Left’s preference for what we might call government-worship; but many among us are doubtful that the American people today have the tools of mind and spirit to choose a better path, as opposed to merely resisting the destructive one.

I don’t share that doubt. My years as an intelligence officer taught me -- to invoke the line from Field of Dreams -- that “If you say it, they will hear.” Many Americans, especially younger ones, are for the first time hearing the American Founders’ case laid out for why “that government is best which governs least.” They aren’t accepting it immediately. Some of them are hooting and shouting to drown the message out. But good ideas have a way of surviving ridicule and elective deafness. They work their way into people’s minds and hearts. They induce people to begin to see things differently: to test the ideas against the reality around them and evaluate their import for explanatory value and moral utility.

As the rain and the snow come down from heaven, and do not return to it without watering the earth and making it bud and flourish, so that it yields seed for the sower and bread for the eater, so is my word that goes out from my mouth: It will not return to me empty, but will accomplish what I desire and achieve the purpose for which I sent it. (NIV)

Godly notions of personal righteousness and civic life have only to be spoken to be heard. If they are heard, they will be thought about. They have strength and value; they will pass the intellectual endurance test. It’s just a matter of time.

I am optimistic about the time aspect of the problem as well. I know there are commentators who predict that it will take generations to get America back on track as a moral polity. But our God is a God who changes the most wasted and dissipated lives in the here and now. His promise is first to the present heart, and only then to generations and the distant future. The most necessary project in our nation today is the changing of hardened and foolish hearts -- the very thing God specializes in, and always in the living generations.

Indeed, most Christian writers and speakers are agreed on this point: when God moves, it is because He has made us ready, and He moves suddenly and does mighty things quickly. People who have been through bad times -- great failures, self-destruction, addictions, the painful loss of loved ones -- know that in most cases, there is a turning point after which things progress steadily upward. Peace, joy, confidence, and practical effectiveness in daily life are restored long before we have learned to do everything “perfectly.” From ashes comes breathtaking beauty, for each person during his years of life on earth.