Dabble-Gate and the Low Bar of the Media 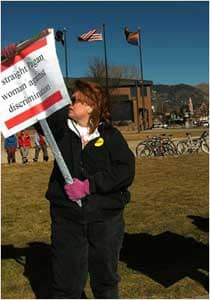 Delaware Tea Party candidate Christine O'Donnell‘s recent Hail Mary pass of a political ad, directly confronting accusations of "witchcraft" that surfaced after an old clip where she admitted to "dabbling" in the practice and having lunch on a "Satanic" altar as a teenager, isn't having quite the intended humanizing effect on several Pagans. A growing Youtube response meme has Pagans reminding O'Donnell, and America, that "I'm you" includes Witches. Here's a run-down of the videos posted so far.

Star Foster, Pagan Portal manager at Patheos.com, was one of the first, and her video gained the attention of USA Today religion reporter Cathy Lynn Grossman.

Right around the same time, COG First Officer-elect Peter Dybing (acting as a private citizen and not as a COG representative) also posted a video response.

From there the phenomenon has seemed to take on a life of its own. There are videos from Angela from the Pagan Mom Blog, Kei Dallmer, and Rebecca Chow so far.

No doubt more videos are being made and posted as we speak.

In addition, this revival of "dabble-gate" has spurred even more coverage and interviews with modern Pagans. Time Magazine has a very good interview up now with Delaware-based Wiccan Priest Michael Smith, a member of the Assembly of the Sacred Wheel, and a Cherry Hill Seminary Board member.

There was a lot of eye rolling. It obscures the actual issues involved [in Wicca]. Who knows what she did or dabbled in when she was in high school. I doubt very seriously that she knows what it was. Certainly I do not think that she has any concept about what witchcraft, Wicca, or paganism actually is. I doubt very seriously whether she has any concept of what Satanism actually is.