The Daily Gift and Reminder: The Habit of Witness

Patheos' "The Habit of Witness" series features essays written by consecrated Catholic women and men sharing their encounters and experiences while dressed in the habit. In this second installment, a monastic nun explains the meaning of the habit, and how it is a daily witness to the sister, herself. 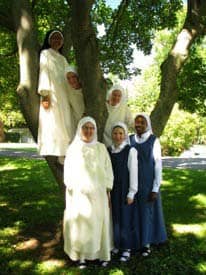 I am a cloistered nun and leave the monastery only for necessary business. One cold January I was at our sister monastery in the Bronx and had accompanied another nun who had business in NYC. My first trip to the Big Apple! The prioress had insisted that we have a little treat so we stopped in a café, anxious to get warm with a cup of coffee.

Imagine the scene: a little café full of people, either bustling about or chatting at tables while warming their frozen hands around steaming cups of java. Two nuns walk through the door and it seems like all eyes turn their way. One patron calls out, "Sisters, you have made a lot of people happy today!"

We smiled our biggest smiles, the words warming our frozen cheeks. But what does one say to that?

I felt so small, so human, and so humbled that I just wanted to drop down on the floor and say, "I'll try harder, I promise!"

Most nuns and sisters could tell numerous stories about people's reactions to the habit -- all good; all humbling; all manifesting how the habit speaks a universal language and points to the reality of God. People notice the wedding ring and wonder why I wear one, while children respond to the habit most perceptively, asking, "Are you God's wife?" There are the smiles as people walk by, the waves from across the street.

But the habit is primarily a witness to the person wearing it. In the first years after the Edict of Milan in 313, as the persecutions stopped, Christians flocked to the desert to give their lives totally to God, as completely as if they were being martyred.

Even then monks and nuns put on the habit, symbolizing their total dedication to God. Slowly as time went on the vows signified this consecration, but originally it was the habit: often a poor, rough garment, rather like what poor slaves wore.

In our Dominican tradition, on the day the young nun receives the habit she is clothed piece-by-piece, by the prioress and novice mistress. It is a passive action. The new sister kneels there and the tunic, belt, scapular, cappa, veil, rosary, and crucifix become the symbol of her intention to become transformed by Christ into the new person reborn through obedience, transfigured by Christ Crucified.

In our monastery the new novice sews none of her future habit. This is because in being given the monastic habit, being given clothing not her own, she becomes a member of this monastic community. From this day forward everything she uses -- including everything she wears -- belongs to the community. With the community she holds all things in common like the first Christian Community of the Acts of the Apostles. She throws in her lot with this communio trusting that through them God will provide for what she truly needs.

The experience of one's clothing day remains etched in heart and mind. For Dominican nuns, that means etched in lines that are black and white! White for purity; black for penance. Two years after her clothing, a novice will profess vows, and a black veil will be placed on her head signifying that she has become "recognized as a house of prayer . . . and a temple of intercession for all people."

That's a tall order. Humanly it is not possible. It is only because God wants it so that the newly professed nun can carry the world in her heart.

We human beings need symbols to remind us that we are not made for this world but, as St. Elizabeth Seton used to say, we are "children of eternity." Each piece of the habit reminds the person wearing it that she is made for God. The tunic reminds her of the baptismal garment, the scapular is the yoke of Christ and sign of the Virgin Mary's protection. The leather belt reminds her to follow the commandments and the ways of justice. The cappa, the black cape of the Dominican order, symbolizes that Christ her Beloved has wrapped her in the garments of joy!

Daily she prays as she places the veil on her head, "He has placed a sign upon my brow that I may admit no other lover than Him."

A nun is still very much a woman and like all women needs to hear that she is loved. If she forgets the language of love, the habit will no longer have meaning to her. The habit is one such token of Christ's love for His bride if she has ears to hear and eyes to see. Such love can only radiate joy!

Read another account in "The Habit of Witness" series:  According to Plan.

Sr. Mary Catharine of Jesus Perry, OP is the novice mistress of The Monastery of Our Lady of the Rosary in Summit, New Jersey. Their blog may be found at monialesop.org.