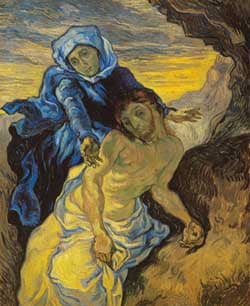 Yesterday the body of Tyler Clementi, a freshman at Rutgers University, was pulled from the Hudson River. His wallet and cell phone were left at the spot on the George Washington Bridge where he jumped to his death, just two days after his roommate invaded his privacy with a webcam. A few weeks ago, Denver Broncos wide receiver Kenny McKinely was found dead in his apartment -- an apparent suicide. Many expressed shock and surprise that someone they assumed to be happy, positive, and in the prime of his life would suddenly bring that life to a violent end. Also a few weeks ago, 35-year-old Mitchell Heismann ascended the steps of Memorial Church in the Harvard Yard and, in plain view of a tourist group, shot himself in the temple. The 1,905-page book he posted online, "Suicide Note," explains his suicide as an "experiment in nihilism," a natural response to the conclusion that life is meaningless. Everything is biology; there is nothing transcendent or interesting enough to live for. This past March a 15-year-old Irish immigrant, Phoebe Prince, hung herself at home after months of vicious bullying by a group of students.

Suicide is not going away; indications are that the problem is getting worse.

The existentialist writer Albert Camus said, "There is but one truly serious philosophical problem, and that is suicide. Judging whether life is or is not worth living amounts to answering the fundamental question of philosophy."

How does one in the throes of despair (recognized or hidden, open or secret), or dealing with the onslaught of trauma (the betrayal of trust or confidence, an unwanted exposure of one's private life, merciless bullying, etc.), or trapped within the philosophical strange loop of nihilism and meaninglessness, answer the question whether life is worth living?

Those of us who have managed to escape life's hardest blows can barely comprehend how suicide could appear to be an answer to the problems of life (but then, who of us hasn't at one point or another fantasized about it -- even if just for a instant?). And yet, that is exactly how suicide appears to far too many people: an escape from life's troubles. The solution to the problem of life is death. For the despairing, there is not even a hint of hopefulness. Life is utterly bleak. Dull. Gray. Or completely dark.

In her recent book, Jesus Wept, Barbara Cawthorne Crafton writes, "The person who considers suicide truly believes it to be the only way out of his pain. It is counterintuitive to those who are not suicidal, but death feels to the sufferer like a measure of freedom in an otherwise imprisoned life, a light at the end of an interminable tunnel. Maybe I can't get better, but at least I can get out."

Theologians and spiritually-minded people speak with mystical admiration about the "dark night of the soul"; they refer to St. John of the Cross with holy reverence. But the kind of depression or despair that leads to suicide is not quite the dark night. Several authors have pointed out that those who experience the dark night find motivation to persevere through it. As James Loder put it, when they stare into the void, they still see God, howsoever blurry the vision. For the despairing, severely depressed and suicidal, God has faded altogether from view. And with God, hope.

Christianity has, by and large, failed the clinically depressed and suicidal among us. We've had a long history of doing so. Augustine and Aquinas, for all their remarkable contributions, set suicide apart as the unpardonable sin. Suicide is the destruction of God's gift, the body. It is the ultimate rebellion -- a last slap in the face of God and a final break with one's fellow human beings. This is why many churches in the past refused to perform Christian funerals for suicides, or even to bury them in their cemeteries. They were apostates. When I worked with teenagers in two different contexts, the number one thing they wanted to know was: Do people who commit suicide go directly to Hell? Dante's vision has stuck with us: in the Inferno, suicides occupied a lower level than murderers, because they murdered themselves, rejecting God and his gift of life.

The church needs to articulate a more empathetic vision. As Kathryn Greene-McCreight suggests in her powerful book, Darkness is My Only Companion, what if we should understand suicide not so much as a sickness of the soul but as a sickness, or even disease, of the brain? After all, that is what severe depression is. It's a sickness, a disease. There are various reasons why people commit suicide, of course, and all of them are tragic. The reasons do not all boil down to brain chemistry. But this makes the challenge of greater empathy no less urgent.

About Kyle Roberts
Kyle Roberts is Assistant Professor of Systematic Theology and Lead Faculty of Christian Thought, Bethel Seminary (St. Paul, MN). He researches and writes on issues related to the intersection of theology, philosophy, and culture. Follow Kyle Roberts' reflections on faith and culture at his blog or via Twitter.