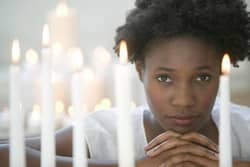 Christianity has been quietly undergoing a shift in thought and practice over the past two decades. Those involved say that they are "emerging" beyond the understanding of faith that we've had since the Reformation. This movement, known as emergent Christianity, is re-examining what it means to be Christian in the world, and many emergent churches unapologetically affirm gay rights, a non-literal reading of scripture, and religious pluralism. Those who identify with the movement are said to be participants in its ongoing "conversation" -- a word used to signify the ongoing exploration of ideas, diverse theological perspectives, and openness to a new understanding of what the Church and Bible are (or arguably are not) in the postmodern world.

Despite the exciting prospects of what such a movement could bring, the conversation is not without its own challenges. Emergence has its roots in the mainline Church, which is made primarily of white men and women. The conversation is still burning hottest at its origin -- it has not yet rippled beyond its center and very few minority churches are involved. Thought leaders within the emergent church are beginning to acknowledge that the movement's current lack of diversity could compromise its effectiveness. Bloggers who either observe or participate in the movement have spent the past two or three years questioning whether the emergent church will catch on among ethnic believers. As an ethnic woman who identifies as "emergent," I would like to share a few thoughts.

Like any organization embedded in a progressing society, the African American Church is probably already emerging in thought among its laity, even if its leadership and theology seem unmoved. However, those of us who have emerged are not typically aware that our questions about God, faith, and life are being explored on a grander scale. We currently lack the framework in the African American community to partner with the emergent movement, and are therefore unable to funnel its ideas to ethnic believers in search of a more progressive faith.

The problem is not merely one of logistics; it is also one of history and theology. For instance, the consequences of partnering with such a movement are made painfully clear to me every time I attend a worship service, have dinner with an African American Christian friend, or open my mouth to speak to my own pastor. Many of my friends don't know what an emergent church is. When I try to explain the purpose or concept of such a movement, I'm usually greeted with blank stares and befuddled rebuttals.

I can recall mentioning the emergent movement to my pastor over lunch one day. His assessment: "They're heretics." He dismissed them without considering why a long-time Christian like me might be attracted to such a radical faith paradigm. Disappointed, I knew that my emergent ideas about what church could be were probably too "liberal" for his ministry style, so I stuffed a few french fries into my mouth and allowed him to change the subject.

Since that time I've recognized a number of other things that might prevent an African American from joining the movement. Here are just a few things that the emergent church should consider when trying to invite African Americans into the conversation.

1)The History of the Black Church
The Christian faith has been a pillar in the Black community since slavery. My ancestors clung in faith to their belief that God would deliver us from bondage as they sang songs like "Wade in The Water." The lyrics carried a dual meaning. The mainstream understanding was purely spiritual (John 5:4), but the underlying code told slaves who wished to be free to wade through the nearby river as it would lead them to the freedom trail or underground railroad. When the slaves were finally freed, African Americans erected church buildings that served their communities as worship centers and meeting places. Black pastors held the first "leadership" roles that existed in our community. Then, Jim Crow gave way to the civil rights movement and people of color who would never have otherwise gone to church packed the pews to hear the ideas of a fiery preacher named Martin Luther King. The church has been a place of political organization, hope, growth, and meaning for African Americans in a way that I don't think many people understand. For many of us, choosing the Emergent movement would be tantamount to separating oneself from a root that runs deeper than many of us can describe.

2) Worship Style
Gospel music is misunderstood, even by many African American Christians, and has been somewhat reduced to an entertainment industry. But prior to the days when Kirk Franklin began to sample George Clinton, we stood in hot churches and sang songs that echoed our history. (By the way, that's not a knock against Kirk Franklin. He's actually a favorite of mine.) An interesting thread in the history of Gospel music is that while the beats may change, the music itself has never lost its original fiber. Many of us listen to the Clark Sisters without realizing that their tight harmonies existed on plantations all over the South. We celebrate the soulful stylings of Marvin Sapp and Fred Hammond, but forget that preachers often sang, moaned, and growled the ends of their sermons as they brought down the house on Sunday morning. Our instrumentation is reminiscent of the blues, our choirs sing loud and proud in a cultural expression of praise. To separate oneself from the current "Black Church" is to sever ties with a worship style that is not currently being duplicated in the emergent church. Many of my African American Christian brethren would rather sit under destructive traditions and oppressive leadership than to consider any alternative because a change in worship style would be uncomfortable. Especially when the old system is tied to something as emotionally compelling as Gospel music.

3) Friends and Family
When I was growing up, my family didn't attend church unless someone was getting married or buried. In fact, I was 22 years old before my mother and I ever went to church together for the sheer enjoyment of the experience. Now a decade later, my mother, father, and I regularly attend a non-denominational fundamentalist church. Some of their theological perspectives make me very uncomfortable, but I love sitting on the pew with my parents. I love coming home and discussing faith and God with them (although I spend a lot of time deprogramming what they hear about homosexuals and hell.) I love watching my dad's heart soften as the scriptures permeate his soul. And I lie awake wondering what will happen when I tell them that I'm leaving the congregation.
Article Continued On Next Page
Page: 1 of 2
10/26/2010 4:00:00 AM
About