The First Fruits: The UK One Month After Benedict 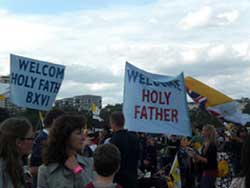 Recently a coalition of UK evangelical Christians launched a project called Not Ashamed to be Christian, wherein adherents would promise to wear an outward sign of their faith on December 1 of this year.

It might seem strange to open a reflection on Pope Benedict XVI's recent missionary journey to Britain by flagging an initiative by people not normally admitted to the ecumenical tent, but in reality the pope's visit seems to have pre-empted this venture . . . or is it a move of the Holy Spirit?

Since the pope's mid-September visit here, there is a definite sense of English Catholics suddenly rediscovering their confidence (the Scots have never lacked this). This emboldened spirit even seems to be emerging from the normally reticent hierarchy. Archbishop Vincent Nichols of Westminster (London) in a pastoral letter following the pope's visit urged his flock to make their faith more visible in daily life, by offering to pray for people, by openly blessing themselves with the Sign of the Cross, or by making such remarks to people as "God bless you."

Now to some, especially in a country as in-your-face religious as the USA, this may seem pretty basic. But in one of Europe's most secular nations, where even an employee of British Airways was disciplined for wearing a cross, this is quite up-front and noteworthy.

Roman Catholics could be forgiven for feeling cowed by the aftermath of the abuse scandals, yet since the pope's humble acknowledgement of the hurt and anguish suffered through decades of inaction and mishandling, there is a tangible feeling that a boil has been lanced.

The Holy Father's visit began with media hostility and ended in tens of thousands of people -- not just Catholics -- lining the streets for him. Visiting several churches across different cities since his visit, one notes a sense of the foot soldiers in the pews feeling less inhibited about their faith. Hearing a newly-consecrated bishop preach last week on the 10th anniversary of the establishment of the Schoenstatt' movement's first shrine in the UK, I was struck by the sheer joy on this shepherd's face as he peppered his homily with references to the words the Holy Father uttered in the UK.

And people seemed so grateful for this.

Some bishops have referred to a "Benedict bounce" with more people coming to church and an increase in inquirers.

Personally I think this is far too robust a term to be associated with the holy, gentle, humbly intellectual genius that is Pope Benedict XVI. It is no coincidence that he chose Newman's motto Cor Ad Loquitur (heart speaks to heart) as the motto for the UK visit. The awesome, genuinely warm four-day exchange between shepherd and flock will grow a lasting fruit because Pope Benedict spoke to our hearts -- and indeed our souls -- but the season of growth may be extensive. His kind of witness sometimes takes longer to bear fruit as we try to overcome our concupiscence.

A friend told me an enlightening story last week. She was attending 40 hours devotion at an inner city church, where she heard the priest confess of his lukewarm initial response to the pope's scheduled evening vigil for youth at London's Hyde Park. But Fr. X explained that as he encountered the incredible silence of a Pontiff and his outdoor flock of 80,000, praying in adoration before the Blessed Sacrament something moved him, profoundly. In fact, he based the last hour of the 40-hour devotion on the pope's programme for that night.

Everyone who attended that vigil has spoken of the silence at that event, which seemed to many to recall the half-hour silence mentioned in Revelation 8:1. One man, I know, a fully paid up member of  "the church liberal," has repeatedly spoken with awe about how that silence, that vigil, affected him.

Of course the Lord's parable of the sower and the seed is a reality check; some who embraced the pope's visit may be like the seed that did not bear fruit. However you can't help thinking that Peter came among us obeying the Lord's admonition to strengthen the brethren (Luke 22:32), and that his obedience was efficacious.

We feel truly strengthened by those truly amazing four days in September.

Based in Manchester for BBC Online, Paul Burnell here shares a personal view from the pews. He is a former Deputy Editor of the UK Catholic weekly, The Universe. He has written for The London Times, The National Catholic Register and Catholic World Report.