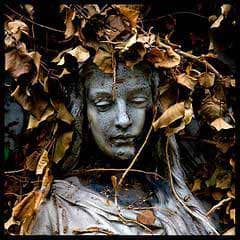 Halloween is quickly becoming America’s favorite secular holiday. Retailers are expecting stronger Halloween sales this year. Churches are asking people to hold their secular festivities on a day other than Sunday. Towns are setting up safe zones where kids can trick-or-treat. Clubs are hosting costume parties. Halloween is big business, and unlike Christmas, the commercialism is for the most part divorced from the religious holiday it shares on October 31st with Samhain (pronounced SOW-inn).

Legend has it that the veil between the world we live in, and the spirit world beyond, thins on this night. While this has given birth to spooky tales in Halloween celebrations, for Pagans it means you are closer to your ancestors than at any other time of the year. We honor them by telling their stories, displaying their photographs, and inviting them to share the night with us.

Some Samhain nights I have passed the evening without feeling my ancestors, either biological or spiritual, around me. Other years I have felt their presence strongly, their energy surrounding me with their strength, love, and wisdom. On cool October nights beneath a starlit sky, I have felt my grandmother wrap me in her warmth and whisper words of encouragement and strength.

We’ve sanitized the whole idea and process of death in this age. We no longer prepare our loved ones’ bodies, dig their graves, or even keep the grave tidy and clean. We pay people to do these things so we never have to deal with the palpable reality of death. We remove ourselves from the experience. We keep photos and move on, essentially keeping the dead divorced from our lives. We tell ourselves it’s healthy to move past the dead and forward into the future.

Yet it is our past that gives us strength. Think of all the ancestors who live in your DNA, contributing their genes to create the highly unique expression of humanity that you are. Think of the traditions, decisions, battles, and ideas that have shaped your life which originate from those long ago passed away. Even if you choose not to honor those who have gone before, the dead are with you every day.

When I speak of gravity, Newton is present. When I belt out “Kill the Wabbit,” both Chuck Jones and Wagner are present in that moment. When I make cornbread, the women of my bloodline surround me. We are constantly drawing on the well of knowledge and inspiration that is the past. This knowledge and inspiration comes from the memory of those who have passed beyond this plane of existence. Every step we take is on foundations built by our ancestors.

Just as it’s not healthy to sanitize the idea of death and divorce ourselves from its reality, it’s also not healthy to dwell on morbid themes. Most Wiccan and Pagan holidays focus on life, yet we give one of our holiest days over to the dead. Amidst the fruitful bounty of the harvest, when the very last fruits and vegetables are gathered in, we take time to sit with death in all of its guises.

Death isn’t merely about human mortality. Samhain means “summer’s end” and the death of the fruitful season is also contemplated. We’ve each had dreams that died, feelings of love that died, prejudices that have died, and habits that have died. Let’s not forget that the passing of a pet or death of a beloved car is also cause to mourn.

One of the four great fire festivals, Samhain is also about purification. The festival lies at the turning point of the Celtic year and you do not carry dead things into the new year. You prune your life, you pay respect to things past, and you move forward into the incubatory introspection of winter clean and new.

For many of us this is traditionally when the sun dies. His power wanes, he grows weak, and darkness encroaches upon the earth. We live in growing darkness, in increasingly colder temperatures until Yule, when the sun is reborn and begins to wax strong once more.

This idea of death and resurrection is one of the oldest of Pagan ideas, yet today it’s hardly unique to them. For example, Christianity also celebrates birth near the Solstice, yet they recognize the death of their God in the spring rather than autumn.

While the past six months have focused on the joyous fertility of the Goddess, the next six focus on the God. Not only his death and rebirth, but the dark days of hunting, crafting by firelight, and introspection. The Wiccan calendar follows the agricultural year, and the six months that comprise the God-half of the year would have been spent storing food, weaving, carving, making music, working leather, storytelling, and maintaining the fire.