No Devil: The Horned God of Wicca

The emphasis that the Lord and Lady have sway over death and rebirth, I suspect, is also a promise that they can break any holds placed upon the soul by foreign religions. Their devotees need not fear losing their soul to a strange Eastern cult but by devoting themselves to the Wicca they will return and not be separated from their tribe for eternity.

Wicca, seen through mythological eyes, becomes a mystery cult like Eleusis. By embracing the darkness and through secret worship Wiccans gave vent to the secret rebellion of their souls and embraced the hope of change and light. The moon is startlingly bright when full and has its cycle of ebb and flow. The Horned God is actually most often depicted with antlers, which grow, mature, and are shed in turn. These cycles of change held a distant promise that one day the age would turn once more and the era of fear and secrecy would end. Wherever the true origins of Wicca might lie, it's possible that we were their dream, that you and I were their fondest hope.

Margaret Murray, contentious as her work is, cites several records from the Witch Trials where it was said the "Devil" required that those who would worship him would renounce their baptism and give him their soul. From a Christian viewpoint this may sound sinister, but as a modern Wiccan this makes perfect sense. If you wish to be reborn, yet have bound your soul to Christ because it is not safe to do otherwise, then you must sign your soul over to your Gods’ keeping in secret. It's very contractual and businesslike, but ancient Pagans were fond of contracts and agreements with the Gods. The idea of an unconditional relationship with a God is a recent, and to some degree monotheistic, idea. 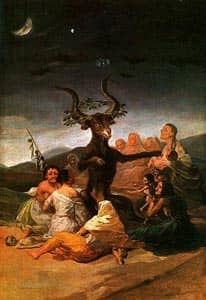 What a revolutionary and daring idea: to break your contract with one God, while still paying him lip service for safety's sake, while entrusting your soul's care to another God, who is the wild, hairy, sexual, and dark antithesis of the first God! What brazen boldness to maintain two spiritual lives side-by-side, one for safety and appearance and the other for salvation and joy.

In this mythologized look at the Horned God, Wicca becomes an Underground Railroad for Pagans. While its practitioners led rather ordinary and respectable lives, their souls are traveling the dark paths of night seeking the hope and promise of moonlight. The "saving of souls" from the terrifying (to the Pagan mind) “salvation” of Christianity is a marvelously wondrous idea. It may not be literally true, because so much regarding Wicca's origins remains shrouded in mystery, but it rings mythically true to me.

Today the Goddess tends to garner most of the attention in Wicca, and that is a healing emphasis for many. As a woman who is very devoted to the Horned God, I like to think that perhaps he may have been of greater importance to Wiccans of yore, whoever they were and if they were. He was a symbol of their souls’ rebellion, their "savior," and the perfect foil for the Inquisition. When your God is incorrectly identified as the Devil, recanting your allegiance to the Devil is meaningless and does not prevent the Lord of Death and Rebirth from guiding your soul back to your tribe on earth.

Hear the words of the dancing God, the music of whose laughter
stirs the winds, whose voice calls the seasons:
"I who am the Lord of the Hunt and the Power of the Light,
sun among the clouds and the secret of the flame,
I call upon your bodies to arise and come unto me.
For I am the flesh of the earth and all its beings.
Thru me all things must die and with me are reborn.
Let my worship be in the body that sings,
for behold all acts of willing sacrifice are my rituals.
Let there be desire and fear, anger and weakness,
joy and peace, awe and longing within you.
For these too are part of the mysteries found within yourself,
within me, all beginnings have endings, and all endings have beginnings."
~ The Charge of the God