One Nation Under God, By Force

Editorial Note: This article appears as part of a series, with contributions from varying perspectives, examining American Evangelicalism and National Idolatry. 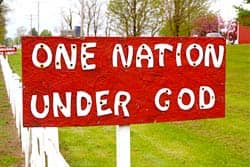 Christian defenses of patriotism are often peculiarly prickly, as if the author is perturbed that anyone would be so bothersome as to question the compatibility of Christianity and Americanism. Or, as in the case of David Limbaugh, who argued here last week that "patriotism is not idolatry," they rebut arguments no one is making. Mr. Limbaugh, for example, hurried to reject the idea "that to be patriotic is to worship America" and to insist that revering the Constitution is "not inconsistent with Scripture." As far as I know, Christian critics of patriotism have not suggested otherwise.

When I accuse conservative evangelicals of worshipping the United States, I do not mean that they hang too many flags on their houses or get too emotional singing “The Star-Spangled Banner.” (I can hardly recall a time I heard our stately national anthem without choking up.) What I have in mind are the excessive stakes they believe to be riding on the outcomes of the American political system, such that negative political activism has been the most energetic witness for Christianity for the past several decades. The fuel for that activism has been a kind of spiritualized American patriotism that lacks a global, eternal Christian view of what it means to be a wayfaring stranger on this planet.

Religion-fueled patriotism is no historical aberration. In the ancient world, when two nations established a diplomatic relationship, their gods often merged. To mount an assault on a country was to directly affront that nation’s god, its values, its existential conception of itself. Religion and patriotism are difficult to separate even in the modern world, as we see in the current struggles between the United States and the Muslim world, or Israel and Palestine. A huge number if not a majority on both sides see these conflicts as battles over whose version of history and reality will stand.

Christianity, however, proposes an alternative vision for relationships between humans and between God and man. By coming as a failed Messiah, a sacrifice for the anawim (scum of the earth), Jesus confounded, subverted, and overturned the long-held expectations of the Jewish people. His message and example were as radical as they were unmistakable: whoever loses his life will find it, the last will be first, and whoever does not leave his old allegiances behind is unfit for the kingdom of heaven. Entering that kingdom, he made clear, required a profound surrender of human “rights,” a willingness to give up the allegiances, squabbles, jealousies, hatreds, and passions with which humankind busies itself.

Jesus’ example is a transcendent ideal no human will ever attain. Human beings will naturally be drawn into social and even international conflicts. But by definition, Christians should have an uneasy relationship with earthly powers. They will see error, cruelty, dysfunction, arrogance, and failure in themselves and in their countrymen, individual and collective. They will see the tragic flaws in their nation's domestic and foreign policies -- and likely even in some of its defining characteristics. The New Testament commands Christians to obey earthly authorities and “render to Caesar what is Caesar’s,” but nowhere does scripture recommend they pledge allegiance to a flawed temporal nation. In fact, there is no clear evidence in the Gospel that patriotism is a priority for Christians or that it should be revered as a virtue. If anything, Jesus showed a remarkable indifference to traditional human relationships and to social and ethnic delineations.

Christ's example should give his followers the most global worldview of any demographic. But that humble, self-sacrificing logic is nowhere found among the most passionate defenders of American patriotism on the Christian right. Mr. Limbaugh may call for "biblically balanced patriotism," but the evidence suggests it's the "biblically balanced" part that needs defending. Everywhere you look in the rhetoric of the Christian right you find ressentiment -- demands for rights and pursuit of vengeance at home and abroad. As James Davison Hunter writes, conservative Christian political activity has displayed a shockingly Nietzschean willingness to win at all costs, even if threats, propaganda, slander, and public venom are required. At its worst, it looks a lot more like radicalism than conservatism.